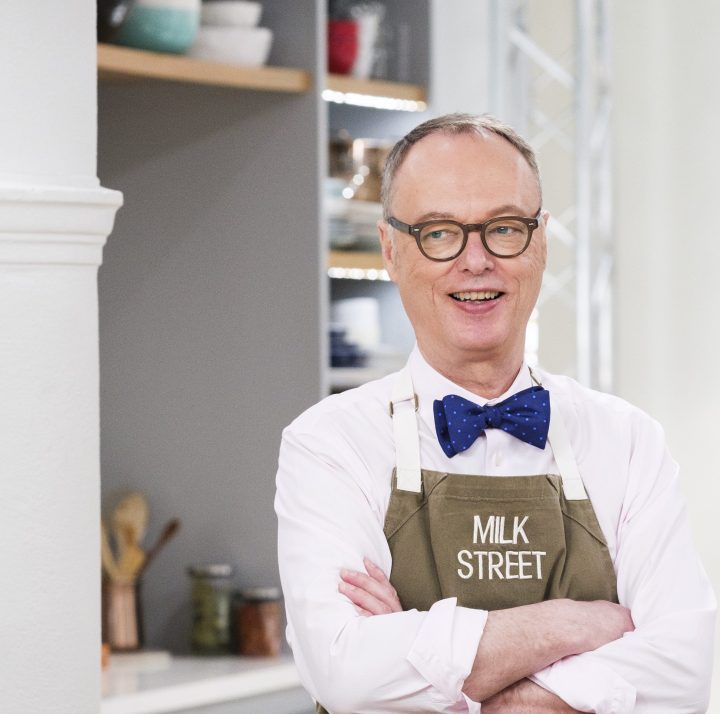 Christopher Kimball spent his career perfecting the rules of cooking. For two decades, we watched as he rigorously tested recipes as the host of “America’s Test Kitchen,” sharing valuable instructions for home cooks. But with his latest cookbook “Milk Street: The New Rules,” he’s embracing an ease to cooking.

It’s the latest offering from Christopher Kimball’s Milk Street, a multimedia cooking organization with TV and radio programs, a website, magazine and a culinary school in downtown Boston. All this comes after a public exit from “America’s Test Kitchen” and his former magazine “Cook’s Illustrated.” Now he’s taking a different approach, searching the world for more fun and flavor.

In conversation with “Marketplace” host Kai Ryssdal, Kimball spoke about feeling liberated in the kitchen again, running a cooking enterprise in the digital era and where he’s finding culinary inspiration. Below are some recipes from “Milk Street: The New Rules.”

Pasta with Pistachios, Tomatoes and Mint

Sicily is known for its pistachios, so it’s no surprise that the colorful, subtly sweet nuts feature heavily in the region’s cuisine. This recipe is our take on a pistachio- and tomato-dressed pasta we tasted in Siracusa. With lemon zest and mint as accent ingredients, the flavors are fresh and bright. Just about any variety of pasta worked well, but we particularly liked long strands, such as linguine and spaghetti.

Don’t use raw pistachios; opt for roasted, as they don’t require toasting before chopping. Either salted or unsalted worked well.

In a large pot, bring 4 quarts water to a boil. Add the pasta and 2 tablespoons salt, then cook, stirring occasionally, until just shy of al dente. Reserve about 2 cups of the cooking water, then drain the pasta.

In a 12-inch skillet over medium, combine the oil and tomatoes. Cook, stirring only once or twice, until the tomatoes have softened and the oil has taken on a reddish hue, 4 to 6 minutes. Stir in half the pistachios, 1½ cups of the reserved cooking water, ½ teaspoon salt and ¼ teaspoon pepper. Bring to a simmer and cook, stirring occasionally, until the mixture is slightly reduced and the tomatoes are completely softened, about 2 minutes.

Add the pasta and lemon zest, then cook, stirring frequently, until the pasta is al dente and has absorbed most of the liquid but is still quite saucy, 2 to 4 minutes. Off heat, stir in the mint, then taste and season with salt and pepper. If the pasta is dry, add more cooking water, 1 tablespoon at a time. Transfer to a serving bowl, then sprinkle with the remaining pistachios and drizzle with additional oil. Serve with cheese.

Rice and lentils with caramelized onions is a much-loved food in the Middle East. This is our take on the version we had in Lebanon, where the dish is called mujaddara. The rice and lentils are simmered together in the same pot, with the longer-cooking lentils getting a 10-minute head start so both finish at the same time. Meanwhile, the onions are fried until crisp and deeply caramelized — almost burnt, really — to coax out a savory bittersweet flavor. Serve hot, warm or at room temperature with a dollop of plain yogurt. It’s a delicious accompaniment to grilled or roasted meats, but it’s hearty enough to be the center of a vegetarian meal.

Don’t use French green lentils (lentils du Puy) in place of the brown lentils called for. Even when fully cooked, green lentils retain a firm, almost al dente texture, while brown lentils take on a softness that combines well with the rice. Don’t worry if the onions turn quite dark at the edge of the skillet; deep browning is desirable. But do stir the browned bits into the mix to ensure the onions color evenly. If the onions brown deeply before they soften, lower the heat a notch or two and keep stirring until the pan cools slightly.

In a large Dutch oven over medium-high, combine 5 cups water, the garlic, bay, cumin, allspice, 1 tablespoon salt and 1 teaspoon pepper. Bring to a boil, then stir in the lentils and reduce to medium. Cover and cook, stirring occasionally and adjusting the heat to maintain a simmer, until the lentils are softened but still quite firm at the center, about 10 minutes.

Stir in the rice and return to a simmer. Cover, reduce to medium-low and cook until the liquid is absorbed and the lentils and rice are tender, about 25 minutes.

Meanwhile, in a 12-inch skillet over medium-high, heat the oil until shimmering. Add the onions and cook, stirring only occasionally at the start then more frequently once browning begins at the edges of the pan, until the onions are deeply caramelized and crisped, 10 to 15 minutes; adjust the heat if the onions brown too quickly. Using a slotted spoon, transfer the onions to a paper towel–lined plate and spread evenly. Sprinkle with ¼ teaspoon salt and set aside; the onions will crisp as they cool.

When the lentils and rice are tender, remove the pot from the heat. Uncover and lay a kitchen towel across the pan, then replace the lid and let stand for 10 minutes.

Using a fork, fluff the lentils and rice, removing and discarding the bay. Taste and season with salt and pepper. Stir in half the scallions, then transfer to a serving bowl. Top with the fried onions and remaining scallions. Serve hot, warm or at room temperature with yogurt on the side.