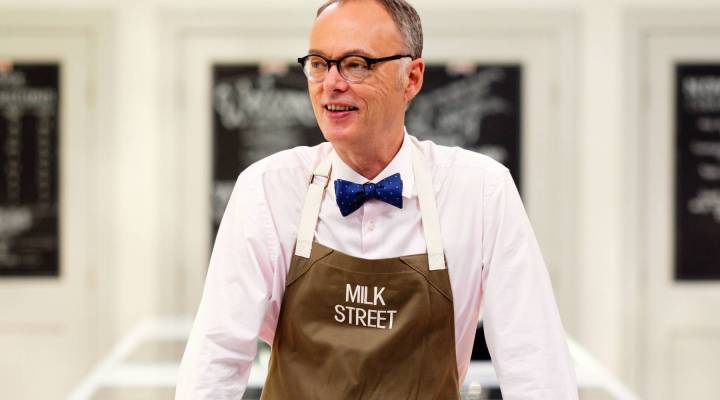 COPY
Instead of focusing on the technique, Kimball says, the key to a good home meal is all about big flavors. Courtesy of Christopher Kimball's Milk Street

Instead of focusing on the technique, Kimball says, the key to a good home meal is all about big flavors. Courtesy of Christopher Kimball's Milk Street
Listen Now

If you’ve ever watched America’s Test Kitchen, the name Christopher Kimball will sound familiar to you. For nearly two decades, he worked on ATK and the magazine Cook’s Illustrated. These outlets were known for perfecting recipes and being strict with their cooking instructions. After a messy breakup between Kimball and ATK, he broke out on his own to start a new multimedia company called Milk Street. It’s complete with a website, a television show, a podcast and now a new cookbook called “Christopher Kimball’s Milk Street: The New Home Cooking.” Kimball talked with Marketplace host Adriene Hill about his latest venture. Below is an edited transcript of their conversation.

Adriene Hill: You’ve been writing and publishing recipes for pretty much decades now. How has the way we cook at home changed in that time?

Christopher Kimball: It’s about to totally change. It used to be that traditional American cooking was Northern European, and that’s a very particular style of cooking, which was heavy on technique and that’s not really how most of the world cooks. So we’re going from a Northern European technique-based culinary tradition to one where it’s just about flavor. If you think about it, this whole idea of mastering the art of the technique to develop flavor is unnecessary in a world where you have the option of buying foods with very strong flavors at the outset.

Hill: You say it’s about to change. Why aren’t we there yet?

Kimball: Home cooking is the last bastion of the old guard. That’s because people get into a routine. Maybe their parents cooked a certain way or that they’re used to a certain style cooking, so changing people’s personal habits is harder than changing where they eat.

Hill: I’ve spent a lot of years reading and cooking from Cook’s Illustrated, and one of the things that struck me about Milk Street is how much less buttoned up it is. It seems to me sort of less focused on making the perfect version of something. Is that fair?

Kimball: I think that’s fair. We don’t read the recipe 40 or 50 times anymore. You know, maybe I’m having my third midlife crisis or something, I’m just letting it go. I think that we’re trying to spend our time and energy on the front end. [For example, there’s a soup called] leblebi, [which is] a chick pea soup with stale bread from Northern Africa. Well, it’s the concept of the recipe that’s so intriguing, and there are hundreds of variations on that [soup], so there’s no really best version of that. We’re just trying to create a version that works best in the American home kitchen.

Hill: It seems freeing in some ways to be focused on “here’s a great dish,” you know, the perfection piece of it is not there.

Kimball: There is a joy in this kind of cooking. I’m cooking so much more in the last few years. There is a joy to this food because it’s about big flavors and it’s a new way of thinking about cooking. Let me give you an example: In Japan, when you cook, it’s almost [about] how you move in the kitchen. There’s a certain way to move. In Vietnam there’s the right intent, a very Buddhist philosophy, in cooking. So cooking in other parts of the world isn’t just the instruction. Cooking is performance art.

You know I have been the Larry David of food, right? It’s just like “Curb Your Enthusiasm” here guys. Let’s just look at the science. Look, I still love the science, but there’s an enthusiasm to this project because I’ve realized after all these years, you know, the doors have opened. Other places in the world have so many better ways of preparing food or at least different ways.

Hill: As the recipe repertoire of a home cook shifts as we sort of enter this new big flavor world that you’re describing, what’s it mean for the food industry today both publishing but wider than that?

Kimball: Look, I think the food industry is all over this and has been all over it for years. I mean, the restaurant business is at the front end of this, and I’ve always said if you want to see what’s going on in the restaurant world, look at airports, right? I was just in Atlanta. There’s a place called Aviva, a food court in Atlanta, which has a line out the door. I mean there was a 20 minute line. It’s, you know, schawarma and falafel, et cetera, and when you see that next to the fried chicken place and the hamburger place, and this is the place getting all the business, what does that tell you? I think the country is ahead of us. I think it’s already happened.