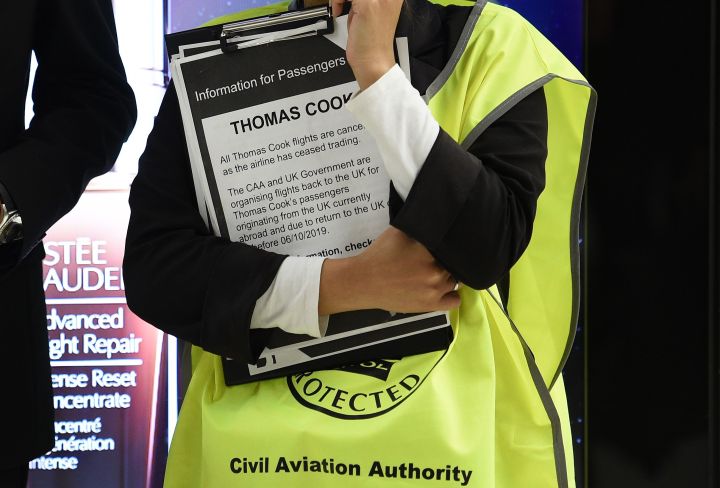 Update: The number of Thomas Cook employees has been updated.

Thomas Cook, the world’s oldest travel-booking company, collapsed in the early hours of Monday morning after failing to find emergency funding, leaving in limbo passengers on vacations around the world and workers without a job.

With the company now in liquidation, Britain’s aviation regulator — the Civil Aviation Authority — is undertaking the United Kingdom’s biggest peacetime repatriation process to bring home its more than 150,000 travelers. The U.K.’s transport secretary, Grant Shapps, told the BBC that comes at a cost of about $125 million to taxpayers.

Another 350,000 foreign nationals are also abroad on vacations booked through the now-defunct company, which operated in 16 countries globally.

“I would like to apologize to our millions of customers and thousands of employees, suppliers and partners who have supported us for many years … this marks a deeply sad day for the company which pioneered package holidays and made travel possible for millions of people around the world,” he said in a statement.

Thomas Cook employees who worked at the company’s shops, as well as at its airline and engineering arms, have been told they should apply for severance payments. While some shop workers will be kept on at the company, it’s not clear how many and for how long as the shops remained closed Monday.

The 178-year old British company, which posted a more than $1.7 billion loss for the first half of this year, was brought down by a range of external factors and a growing debt pile that reached nearly $2 billion. Last year, political and economic instability kept vacationers away from Turkey, a popular destination for European tourists, while a heatwave kept would-be travelers from wanting to go on vacation in warm locations. Worries about Brexit also weighed on consumers, while the rise of internet-based booking sites like Airbnb and Kayak empowered passengers to do their own price comparing and booking online instead of opting for a travel agent.

“In the days when they had a monopoly on global travel, they used to be absolutely worldwide, and they would be the people you’d automatically travel with if you were of a certain class,” said Simon Calder, a travel journalist with The Independent. “But unfortunately, they found they were being left behind. It was just an old, giant company that sadly refused to move with the times. And now investors and staff are suffering as a result.”

Last August, the company secured a more than $1 billion rescue deal that was led by its biggest shareholder, Chinese conglomerate Fosun. But more recently, banks demanded Thomas Cook raise another $3 million for contingency funding, which the company was unable to do.

Thomas Cook employed 22,000 people around the world and owned 105 aircraft that flew under its own name, as well as 200 hotels and resorts.