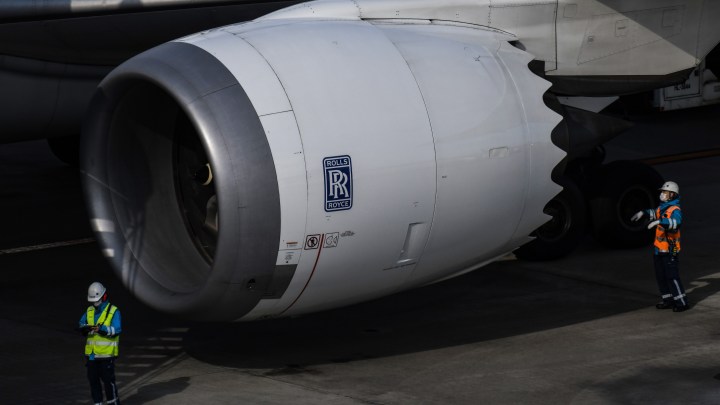 COPY
Workers stand next to a Rolls-Royce aircraft engine on a passenger plane at Tokyo's Haneda airport in January. The British company secured a $2.5 billion deal to supply 650 engines for the U.S. Air Force’s B52 bombers. Charly Triballeau/AFP via Getty Images

Workers stand next to a Rolls-Royce aircraft engine on a passenger plane at Tokyo's Haneda airport in January. The British company secured a $2.5 billion deal to supply 650 engines for the U.S. Air Force’s B52 bombers. Charly Triballeau/AFP via Getty Images
Listen Now

Few major British companies have been as badly affected by the pandemic as Rolls-Royce Holdings, the aero and marine engine maker. (Not to be confused with the luxury carmaker of the same name; the two became separate entities 50 years ago.)

As commercial aviation collapsed last year, Rolls-Royce Holdings plunged into a near $5.5 billion loss, shed 9,000 staff and was forced to sell assets and raise fresh capital.

“They’re almost exclusively exposed to international traffic due to their heavy presence on wide-bodied jets,” said Richard Aboulafia of the Teal Group consulting firm. “And, of course, it’s that part of the market that was hit first and longest by the downturn.”

The company’s problems were compounded by its business model. Rolls makes its money not from selling its engines but from repairing and servicing them. It is paid according to utilization, the number of hours that its engines are in the air.

“Utilization was hit by this downturn worse than at any other time in the history of aviation,” Aboulafia said.

But today, things are picking up for Rolls. A flurry of good news stories has sent the share price soaring in recent months and the company’s prospects, which were dimmed by bribery scandals and worries about engine safety even before the pandemic, suddenly look much brighter. That’s partly thanks to developments in the United States.

The U.S. decision to relax restrictions on trans-Atlantic air travel has been a major boost for Rolls, along with the unexpected success in winning a big contract from the U.S. Department of Defense. Against stiff competition from American rivals General Electric and Pratt & Whitney, the British company secured a $2.6 billion deal to supply 650 engines for the U.S. Air Force’s B-52 bombers.

“That’s an extraordinary number of engines,“ said Guy Norris of Aviation Week. “These days, if you win an engine deal, it’s usually two engines per airplane. The good old days of four-engine planes like 747s are basically vanishing. But here you are, all of a sudden, with an eight-engine plane — so numbers like 650 engines don’t come along every day.”

The prospect of another big defense deal has also surfaced unexpectedly, this one involving underwater warfare. Rolls supplies the propulsion systems for the British navy’s nuclear-powered submarines, and some investors believe the company could now pick up a lot more business as a result of the AUKUS submarine pact between the United States, the United Kingdom and Australia unveiled, unexpectedly, last month.

The company’s nuclear expertise has opened up an even more enticing vista.

In the drive to achieve net-zero greenhouse gas emissions, interest has been growing in nuclear power as a low-carbon and, unlike wind or solar, a constant source of energy.

Tim Yeo, who runs the New Nuclear Watch Institute — a think tank funded by the nuclear industry — applauded the work Rolls-Royce has been doing on a new breed of small modular reactors to help in the battle against climate change.

“They are modular in design, and so the components can also be built in factories, and we expect that will both speed up the process and very likely — although not yet proved — very likely it will prove cheaper,” Yeo said.

They’re likely to cost under $3 billion a pop, according to one estimate — a fraction of the cost of a large custom-made reactor.

“I think the future may well be small modular reactors,” Yeo said, “and that’s particularly interesting to the U.K. because Rolls-Royce is one of the global leaders in developing this technology.”

Rolls’ CEO has been quoted saying that this business could one day dwarf the whole of the existing company, since export markets could be huge. But not everyone buys this rosy scenario.

“Well, the problem is it requires a massive leap of faith,” observed Steve Thomas, emeritus professor of energy policy at Greenwich University. This is still untested technology and would require some $40 billion of taxpayers’ cash to get off the ground, he said.

“It’s a very big bet of public money on something that may or may not prove to be an economic winner,” Thomas said. “I don’t believe it’s going to happen.”

Whether Rolls achieves its nuclear ambitions or not, the pick-up in aviation and an anticipated rise in defense spending in the West seem set to boost the company further.

Traveling hopefully is often better than arriving. And Rolls-Royce is certainly traveling more hopefully today than it was a year ago.