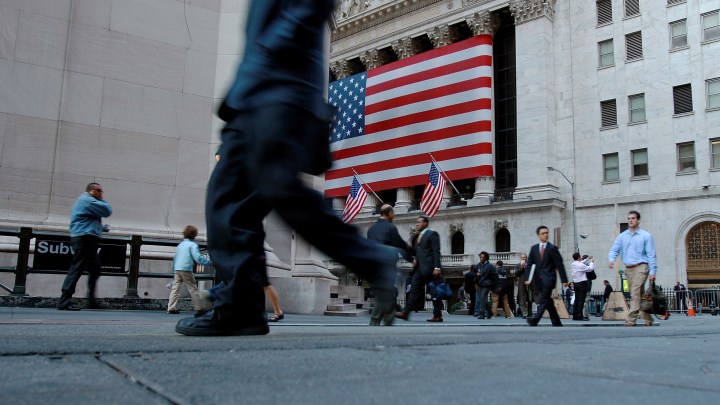 COPY
Pedestrians walk down Wall St. across from the New York Stock Exchange in 2008 at the height of the Great Recession in New York City. Spencer Platt/Getty Images

Pedestrians walk down Wall St. across from the New York Stock Exchange in 2008 at the height of the Great Recession in New York City. Spencer Platt/Getty Images
Listen Now

The U.S. has been through 11 recessions since the end of World War II. That works out to roughly one every seven years.

On the other hand, Australia hasn’t had one in more than a quarter century.

So are recessions inevitable?

They usually happen because there’s some economic shock — energy prices spike or a housing bubble bursts.

Robert Martin, senior U.S. economist at UBS, is confident that we will have another recession at some point. It’s about probability, he said.

“If we had a six-sided die, we could throw that die a lot of times and never see a six,” Martin said. “But sooner or later, that six pops up.”

The six, in this case, is one of those recession-causing economic shocks.

Knowing that another recession will probably happen eventually “doesn’t really tell you very much,” said Jim Wilcox, an economics professor at Berkeley’s Haas School of Business.

There’s a lot we don’t know about the next recession because they’re always different, Wilcox said.

“They differ in the length between them, in their severity, in how long they last,” he said.

That’s why he’s not a big fan of the term economists use for this pattern of economic ups and downs — “the business cycle.”

“The word ‘cycle, ’ I think, conjures up the idea of something rather rhythmic, and therefore predictable,” Wilcox said. “And that’s not what we have.”

Right now, the economy is especially unpredictable. Wages and inflation aren’t going up the way economists would expect. And we’re in the midst of a trade war.

“We’re really in uncharted territory, and so some of the regular patterns we saw in the past may not hold,” said Susan Lund, a partner at the McKinsey Global Institute.

The take-away? The timing of the next recession is kind of a roll of the dice.