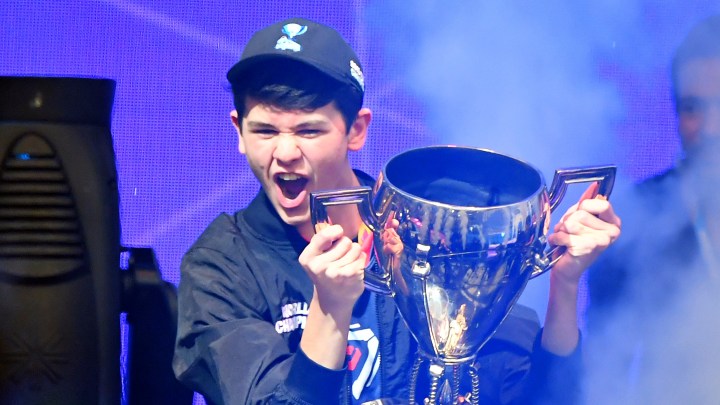 A 16-year-old boy walked down a purple-lit ramp to the center stage as deafening cheers of an entire stadium filled the air. The boy shook his head in disbelief and beamed.

“Ladies and gentlemen … one more time, your world champion: Bugha!” the host yelled into the mic as Kyle Giersdorf hoisted the massive trophy over his head. Fog blasted out of machines and confetti rained down over the audience.

Kyle Giersdorf, whose screen name is Bugha, had just won the first-ever Fortnite World Cup — and $3 million in prize money.

The competition was hosted in Queens, New York, by Fortnite’s publisher, Epic Games, which gave out a total of $30 million in prize money.

According to research firm Newzoo, esports’ global revenue is in excess of $1 billion, with an audience of more than 450 million people. The 23,000 seat Arthur Ashe Stadium was sold out the entire weekend, with tickets ranging from between $50 and $150. an additional 2 million people streamed the finals.

In honor of the first Fortnite World Cup, we’re looking at how the prize money compares to this summer’s other big sporting events.

This year’s Golf Masters Tournament had a purse of $11.5 million. Tiger Woods won the championship and took home more than $2 million.

Earlier this month, the U.S. Women’s National Team won the month-long 2019 FIFA Women’s World Cup. The total payouts amounted to $30 million, with the winning team taking home $4 million. But the team has to split that money among the players; Bugha ended up pocketing more money.

The U.S. Open is set to begin on August 26 in the very same stadium as the Fortnite World Cup. The two-week tournament has a total purse of almost $43 million. The men’s and women’s singles champions will take home $3,850,000 each — just $850,000 more than Giersdorf.