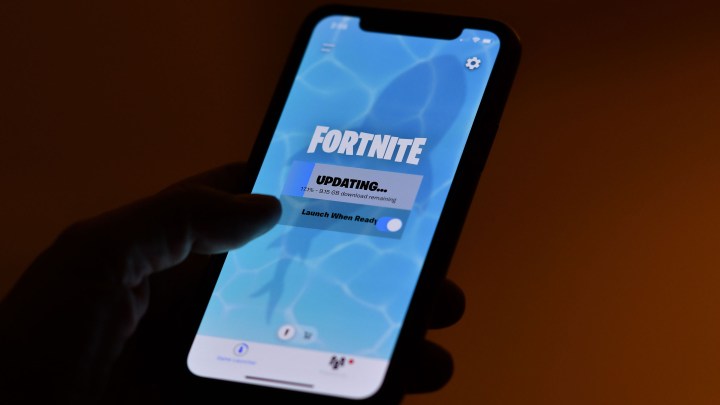 David Brancaccio and Kristin Schwab May 3, 2021
Heard on:

COPY
To download something to your iPhone (such as the popular video game "Fortnite"), you have to go through its App Store. Chris Delmas/AFP via Getty Images

David Brancaccio and Kristin Schwab May 3, 2021
Heard on:

To download something to your iPhone (such as the popular video game "Fortnite"), you have to go through its App Store. Chris Delmas/AFP via Getty Images
Listen Now

Epic Games, maker of the popular video game “Fortnite,” is claiming Apple is running an illegal monopoly. The claim is to do with the way the company’s App Store works, and today Apple goes to federal court. Our reporter Kristin Schwab has more on this story; the following is an edited transcript of her conversation with “Marketplace Morning Report” host David Brancaccio.

David Brancaccio: Kristin, what’s at play with this?

Kristin Schwab: Think back to the last time you downloaded something onto your computer. There are a bunch of different ways to access that download through your browser. Apple’s ecosystem is totally different because in order to download something onto your iPhone, you have to go through the App Store. Apple takes a 15% to 30% cut of app sales, in-app purchases and subscriptions, and Epic says this is unfair.

Schwab: Well, half of the U.S. market doesn’t run on iPhone software. Those are mostly Androids. Apple also says it doesn’t profit off of 85% of the apps in its store, and that it costs a lot of money to run the App Store, especially when it comes to reviewing new apps. The company says 40% of the apps submitted each week are rejected.

Brancaccio: To show it’s a monopoly, what are some of the questions that have to be answered?

Schwab: The first part is defining what the market here actually is. Is it just Apple’s App Store? Is it the smartphone market in general? Or is it even bigger than that, extending to PCs and gaming consoles where you can also play games like Epic’s “Fortnite”?

If Epic proves Apple has a monopoly, it has to also prove the company is violating antitrust laws by tying the App Store to its own payment processing system. Apple argues that’s one product, not two.

The trial kicks off today and is expected to last most of May.