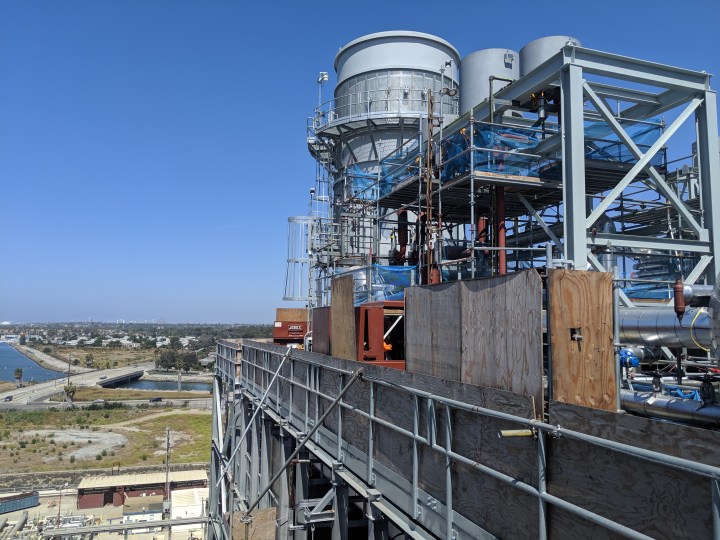 Long Beach, California is known for its huge shipping port, and it’s the hometown of musical artists such as Snoop Dogg, Warren G and Sublime.

But on the city’s southeastern edge, Long Beach also hosts California’s largest gas plant — a series of smokestacks and boxy, concrete buildings that have powered the state since the late 1950s and ‘60s. Now, hundreds of workers are again fitting pipes, packing in insulation and beginning preliminary tests — putting the finishing touches on a new $800 million replacement gas plant, set to begin operating this winter. At peak capacity, it could power more than half a million homes.

Natural gas is often talked about as a “bridge fuel” that can replace even dirtier coal, on the way to a zero-emission energy supply. The U.S. is nowhere near the end of that bridge — in fact, it keeps getting longer, with the Long Beach unit just one of hundreds that utilities and energy companies are adding around the country.

“‘You’re building another fossil fuel plant! How can this be consistent with our [climate change] goals?’” Stephen O’Kane, a manager overseeing the project for energy company AES, asks rhetorically. “But it’s actually part of the puzzle.”

The old gas plant was built to run all the time, providing electricity for a growing California. But the state is now shifting its primary energy reliance to renewables, particularly solar power. Renewable sources accounted for about a third of the state’s electricity generation in 2018. In addition to more efficiently burning gas, the new plant can turn on or off in minutes, rather than hours, allowing it to run less but fire up quickly to take over for solar or wind energy when the sun sets.

Still, California has a goal of eliminating fossil fuels by 2045. Even O’Kane acknowledges the business of building new gas plants has nearly run its course in the state.

“These may well be the last gas-fired power plants ever built in California,” O’Kane says of the new plant in Long Beach and another under construction in Huntington Beach. “This may be it.”

Utilities will have to find a way to replace gas and supply energy at times when renewable resources are unavailable.

East of Los Angeles, behind a barbed wire gate, lies an intriguing answer. On a 1.5 acre gravel lot next to another gas plant, the utility Southern California Edison has rows and rows of white boxes, which look remarkably similar to refrigerators. They’re batteries, a storage system capable of powering 20,000 homes for up to 4 hours.

It demonstrated batteries can be set up quickly, in locations power plants would never fit, and Colin Cushnie, the vice president of energy procurement at Southern California Edison, said it and other battery storage projects have proved the technology can effectively supplement renewables and, ultimately, help fill the role of gas plants.

“Can we envision a world where we charge the batteries when the wind’s blowing and the sun’s shining, and then discharge them at other times of the day? Yes, we can definitely envision a world like that,” Cushnie said. “The question really comes down to economics.”

Driven in part by the shale boom, natural gas has been the decade’s cheapest source of energy, while utility-scale batteries were long seen as prohibitively expensive. But the cost of batteries has been plummeting, falling 76% since 2012, according to BloombergNEF.

Cushnie said SoCal Edison’s battery storage facilities are already cheaper to build and run than a similarly-sized gas unit would be in dense, urban areas where it’s difficult to zone a power plant. Batteries can fit into smaller areas, make little noise, and do not impact air quality.

Some analysts project that as battery and renewable prices continue to fall, combined renewable/storage systems will outprice gas plants in the next decade or two.

“Renewables and batteries are about to do to gas what gas has done to coal in this country, meaning making it uneconomic,” said Mark Dyson at the clean energy think tank, the Rocky Mountain Institute.

Overbuilding the natural gas “bridge” could mean never getting across

Regardless of the price comparison, to stave off the most catastrophic effects of climate change, scientists anticipate the U.S. and other countries will need to leave gas-fired electricity behind by the middle of the century. At the same time, utilities and energy companies plan to invest $112 billion in new gas plants by 2025, as well as $32 billion in infrastructure to transmit the gas, according to RMI.

Amanda Levin at the Natural Resources Defense Council said most of these plants are designed to last a half-century, but running them that long would negate any hope of the U.S. reaching net-zero emissions by 2050.

“I do find it really scary,” said Levin. “Utilities tend to try to run these plants as long as they can. They want to make sure they get their money back.”

In California, utilities do not own most of their electricity generation — they buy it from other companies. Southern California Edison has signed a 20-year contract to receive power from AES’s new power plant in Long Beach. After that, the utility can choose whether to buy more power or switch to alternatives if they are cheaper or better match California’s renewable goals. AES takes on the risk of building a power plant and finding a buyer for its electricity.

That differs from most states, which have regulated markets where utilities do own their power plants. Utility commissions approve the building of new generation plants and guarantee utilities that they can make the money back.

“Let’s just say you have a coal plant or gas plant where you invest a billion dollars, and a few years down the road, the plant becomes worthless,” said Toby Shea, an analyst at Moody’s. “The utility is still entitled to recover that cost from the customers, which we call ratepayers.”

Mass closure of natural gas plants could spike ratepayer bills. Even in California, the cost of paying for gas power now while building renewables and batteries for the future has contributed to one of the nation’s highest electricity prices. And, SoCal Edison’s Colin Cushnie expects that cost to go up.

“Adding batteries while still paying to maintain gas-fired generation will put some pressure on the bill,” said Cushnie. “It’s maybe 20% on the overall bill cost. That is the price of trying to clean your power sector.”

What do you do with the bridge once you’ve crossed it?

At the gas power plant in Long Beach, Stephen O’Kane also thinks that the increasingly attractive economics of clean energy will eventually win out.

“Market forces are changing the entire industry. It’s not just California’s aggressive goals, this is happening worldwide,” said O’Kane. “Obviously the planet is very dependent on fossil fuels, but there’s a huge push [for zero-emission energy].”

Next to the new gas unit, AES also broke ground last month on a battery storage facility that would qualify as the world’s largest.

Still, O’Kane thinks the new gas unit will remain profitable, even after its contract with the utility ends.

“This is the last thing we’ll ever turn off when we go to eliminate fossil fuels,” said O’Kane. “You would hang on to the most efficient ones as long as you can, right?”

And even later, after California’s 2045 goal calls for an end to fossil in the state’s electric grid, O’Kane along with Cushnie at Southern California Edison suggest the plant should continue to play a role in the state’s energy sector.

“You probably still want the gas-fired generation fleet to be available —think of it as a Honda generator in your garage,” Cushnie said. “You only run it when you need to.”