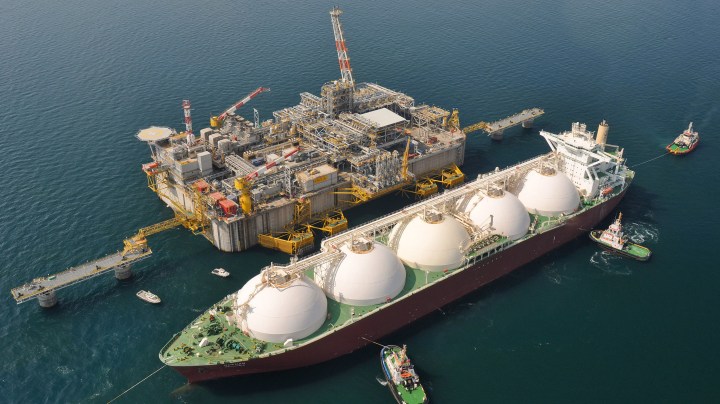 COPY
LNG could play a crucial role in the transition to net-zero carbon emissions. Above, a ship containing liquefied natural gas at Adriatic LNG Terminal, off the coast of Italy. Marco Sabadin/AFP via Getty Images

LNG could play a crucial role in the transition to net-zero carbon emissions. Above, a ship containing liquefied natural gas at Adriatic LNG Terminal, off the coast of Italy. Marco Sabadin/AFP via Getty Images
Listen Now

Demand for natural gas around the world is soaring. So is its price.

That makes perfect sense to retired Louisiana dairy farmer Don Fisher. The corner of the state where his land is located produced about 13% of the country’s natural gas in 2020 and is expected to produce even more in the coming years. Fisher now lives on income from contracts he has with energy companies that extract natural gas from thousands of feet below his family’s pasture.

And not just for him and his neighbors, Fisher added. He also sees the fossil fuel as a blessing for the country as a whole as it pivots to renewable energy sources.

“Think about where you would be without natural gas to produce power,” he said. “I mean, you’d be dependent on coal. And coal doesn’t work with solar or wind, because solar and wind both quit. Coal, it takes all day to restart [a generating station]. Gas you can crank up in 15 minutes,”

The United States is not the only country making that transition. And since the U.S. produces more gas than it uses, some of it ends up at large facilities along the Gulf Coast a few hours south of Fisher’s land, like Cheniere Energy’s Sabine Pass liquefaction facility in Cameron, Louisiana.

Once pipelines deliver the gas to the 853-acre complex, it’s cooled until it liquifies, shrinking its volume 600 times. Then it gets loaded onto ocean-going tankers that can carry it to Europe, China and elsewhere around the world.

Because American energy companies want to make sure they can keep meeting global demand as it grows, they’re expanding. The Sabine Pass facility, for example, is already one of the largest liquefied natural gas, or LNG, plants in the world.

But Cheniere is hoping to increase its capacity by 20%.

“What they recognize is the economic demand that’s being placed on the industry,” said Dan Brouillette, who served as secretary of energy during the Trump administration and is now president of Sempra Infrastructure, the majority owner of another large LNG plant in Louisiana.

Down the road, forklifts move steel pipes at a new LNG export terminal.

The owner, Venture Global LNG, said in early December that, in addition to the facility under construction, it will pump another $10 billion into yet another LNG export facility next door.

The rush to expand is due in large part to demand from China. In October, the country’s state oil company, Sinopec, signed two 20-year deals to buy a combined 4 million tons of LNG per year from Venture Global.

Energy companies borrow the billions of dollars they need to build and expand LNG facilities. Brad Williams at Spitfire Energy Advisors said lenders want to see enough long-term commitments from buyers to guarantee borrowers will be able to repay those loans.

“Just like buying a car,” Williams said. “The lender just wants to make sure that they’re going to get their money back, plus their interest. Same thing with a big energy infrastructure project. They’re just bigger numbers.”

And with natural gas prices higher than they’ve been in years, Sempra Infrastructure’s Brouillette said investors don’t want to miss out on an opportunity to cash in.

“So raising capital for these very capital-intensive projects has not really been that much of a challenge to the industry,” he said. “I think that sends a strong signal of confidence that this is going to be around for a while.”

But energy executives and environmentalists might not agree on how long “a while” will be.

Natural gas could be a “bridge fuel” that helps achieve net-zero carbon emission goals, according to Joshua Rhodes at the University of Texas at Austin.

“I do think it is going to play a role in the short to medium term, for sure,” he said. Rhodes sees the short term as 10 years and the medium as 20 to 30.

Currently, Rhodes said LNG companies should be doing what they can to produce gas as cleanly as possible, limiting methane leaks and the amount they’re flaring.

“If I were telling a natural gas company what to do, I would say, ‘Do the best to future-proof your product. I mean, make it as tight and as clean as possible,’” he said. “While it’s not maybe great for the environment, it’s at least better than what the alternative is.”

An alternative like coal, for example. LNG buyers in Europe and Asia will decide which gas companies to do business with, at least in part, on how much they pollute, Rhodes said — and that could have meaningful implications for their future bottom lines.