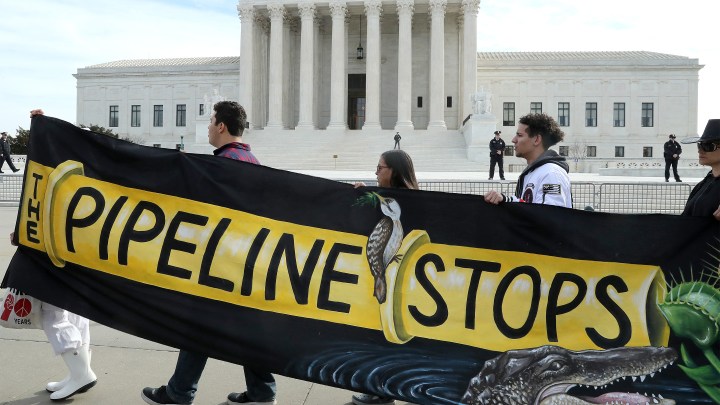 The ambitious Atlantic Coast Pipeline, which was to cross the Appalachian Trail and carry natural gas from underground wells in West Virginia to customers in Virginia and the Carolinas, was called off by its developers Sunday. Natural gas is a fossil fuel that’s widely considered cleaner than coal for producing electricity, but the cancellation has market analysts questioning its long-term future as a “bridge fuel” to a renewable energy future.

The developers, Duke Energy in North Carolina and Dominion Energy in Virginia, cited “an unacceptable layer of uncertainty” arising from permit challenges from environmental critics. Opponents in central Virginia feared that the blasting involved in the construction of the project would pollute waterways.

“Their efforts to hang up projects like this Atlantic Coast Pipeline in the courts just makes the execution risk too high, the investment horizon too uncertain,” said Ryan Wobbrock, energy analyst at the bond-rating firm Moody’s.

The challenges to natural gas don’t just come from environmental groups, though. Many states are reconsidering gas, given plans to go carbon neutral around 2050.

“From the market perspective, we are seeing a shift away from natural gas in the electricity sector that’s being pushed by state regulators and state legislatures,” said Christine Tezak, managing director at the research firm ClearView Energy Partners.

The hurdles raise a bigger question for the future role of natural gas in the U.S. energy mix, analysts say. A decade ago, when the method of energy extraction known as fracking, or hydraulic fracturing, delivered plentiful supplies, natural gas was often dubbed a “bridge fuel” to help Americans transition from coal-fired electricity to wind and solar power.

“If natural gas was ever a bridge fuel, I think we’re coming to the end of the bridge,” said Noah Sachs, law professor at the University of Richmond. “And utilities are saying, we don’t think we need these pipelines.”

To be sure, some investors are still betting on natural gas. Warren Buffett’s Berkshire Hathaway on Sunday paid $4 billion to acquire existing gas pipelines and infrastructure from Dominion after it pulled out of the pipeline project.

“Probably we’ll see this through the end of 2020 at least — that there’s nothing big that can be built,” said Brandon Barnes, litigation analyst at Bloomberg Intelligence. “There just can’t be.”