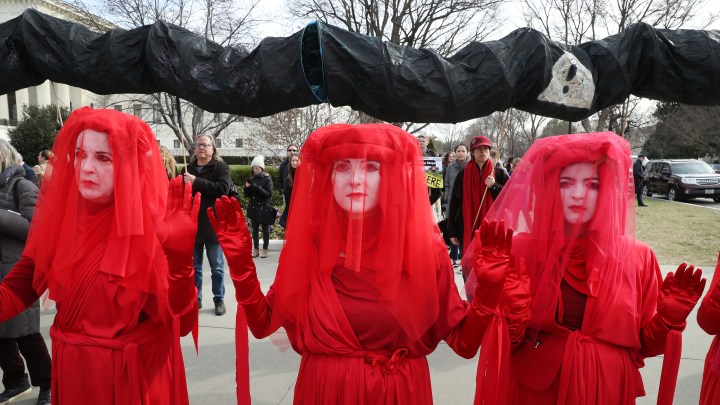 One hundred and fifty miles from the august pillars of the U.S. Supreme Court, where a bitterly contested natural gas pipeline will be the focus of oral arguments Monday, this quiet, wooded hiking spot along the Appalachian Trail is as good as any to sample the fight along the proposed path.

At issue: the Atlantic Coast Pipeline, an $8 billion project to bring natural gas from the hydraulic fracturing wells of West Virginia over the Blue Ridge Mountains to the population centers of southwestern Virginia and North Carolina.

The specific legal question before the court goes to federal jurisdictional permitting issues. But in the business of oil and gas, sponsors of the ACP describe it as a critical artery to deliver fossil energy from its underground source to market. Without this infrastructure — or “takeaway capacity” in the lingo — the natural gas is stuck in place.

“The E&P [exploration and production] companies in the region have not been drilling as many wells” in the natural gas-rich of West Virginia and Pennsylvania,” Brandon Barnes, senior litigation analyst at Bloomberg Intelligence, said. “They they don’t have that capacity to come online to take the gas away. So all of energy is linked.”

Opposition to the pipeline comes in many forms. I’ve driven down from my home in the Washington, D.C., suburbs to central Virginia to observe a clash of competing natural resource economies. On one hand, there’s energy; the pipeline project estimates the project will bring more than $15 million in tax revenue to this county over ten years.

On the other, there’s water. The creeks in and around the Appalachian Trail feed the Rockfish River, which has carved a valley now thriving in what locals call agritourism: fishing, hiking, boating.

Dominion Energy, one of the main sponsors of the Atlantic Coast Pipeline, argues it has taken the relevant environmental precautions.

“We’re building the Atlantic Coast Pipeline with some of the strongest environmental protections, and under the most intense regulatory scrutiny of any infrastructure project in our region’s history,” Aaron Ruby, Dominion spokesman, said. At the contested crossing of the Appalachian Trail, the pipeline would cross 700 feet below ground, out of sight of hikers, he said.

The purity of the water in the Rockfish River is essential to yet one more economic driver in this rural valley: adult beverages. State route 151 is dotted with countless distilleries, breweries and wineries.

“We sometimes call it the Brew Ridge Parkway.”

Large “No Pipeline” banners appear throughout the valley, including one at the entrance to Blue Mountain Brewery. There, local developer and software entrepreneur Richard Averitt explains he’d made plans for a small eco-resort nestled in these mountains. But when news came that the pipeline would run directly through the development, clearing trees where resort resort homes would have been built, he killed the plan.

“They’re going to dredge through the stream and pour concrete in it to stabilize it, so the character of the place doesn’t look like natural beauty,” Averitt said. “And so for us, the project isn’t viable.”

By Averitt’s tally, local agri-tourism creates more long-term jobs in this economically challenged area than the pipeline would.

“We have 40% free and reduced lunches in our public schools,” he said, “so bringing jobs — good paying quality jobs, a good paying tourist economy — to this community, without requiring sort of industrial facilities, is a huge win for this part of the country.”

Contested economics: is the pipeline necessary?

Not surprisingly, each side in this debate touts its own assumptions and numbers. Here in central Virginia, pipeline opponents challenge the underlying economics of the project, pointing to economic studies suggesting weak long-term demand for natural gas and the electricity it can generate. Some industry analysts argue demand is softening, and that pipelines may be overbuilding.

Sponsors of the project, Dominion Energy in Virginia and Duke Energy in North Carolina, counter that gas demand in the two states will double in the next two decades.

“The best evidence is that six public utilities that provide natural gas service to millions in Virginia and North Carolina have signed up for long-term contracts,” Dominion spokesman Ruby said.

Toward the eastern end of the pipeline is Hampton Roads, a populated section of Virginia that includes the urban centers of Norfolk, Virginia Beach and Newport Beach. There, existing pipeline capacity is “fully subscribed,” meaning no new customers can enter into contracts for additional gas, said Mary Hensley, president of Enspire Energy, a natural gas marketing and delivery company based in Hampton Roads.

“They choose not to build in this region,” she said, “or if it’s an existing site, instead of doing an expansion project here in Virginia, we’re seeing them do it in other locations, such as New Jersey or North Carolina.”

“Instead of doing an expansion project here in Virginia, we’re seeing them do it in other locations.”

Many analysts see this as a defining moment for the Atlantic Coast Pipeline project. Even if it wins the Supreme Court fight over one specific permit — allowing the project to cross the Appalachian Trail — it faces additional court challenges involving other federal agencies. With the delays, the project is more than two years overdue and at least $2 billion over budget. to date, the pipeline is 6% complete.

“This particular project has hit probably the largest significant delay in the field that we can remember,” Christine Tezak, managing director at ClearView Energy Partners, said.

Brandon Barnes, senior litigation analyst at Bloomberg Intelligence, gives the pipeline a one-in-three chance of being completed. Of the investors he’s spoken with, “most of them have over time gotten more and more sour on the likelihood of this going through,” he said.