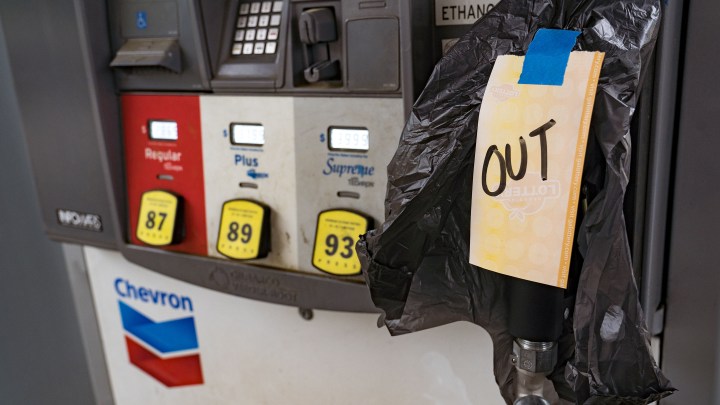 COPY
Gas stations begin to run out of gasoline after drivers rushed to fill up on May 11, 2021 in Atlanta, Georgia. Megan Varner/Getty Images

Gas stations begin to run out of gasoline after drivers rushed to fill up on May 11, 2021 in Atlanta, Georgia. Megan Varner/Getty Images
Listen Now

More than 1,000 gas stations in the Southeast, from Florida to Virginia, have reported running out of fuel, primarily because of what analysts say is unwarranted panic-buying among drivers, as a major pipeline shut down by a gang of hackers seeking a ransom remains shut down. Colonial Pipeline has sent workers to manually open values to move some fuel in Georgia, the Carolinas, Maryland and New Jersey.

“Maybe 70% of the stations around here are just completely out and the other 30% have long lines and high prices,” said Nicholas Medley, who lives in Pensacola, Florida, with his wife and two young kids.

Medley drives a Tesla, so he’s not hurting for gas. But his wife drives a regular old minivan. “And we’re having to carpool now because she was running low on gas before the shortage happened. It happened in a blink of an eye, there was no warning really,” he said.

No warning for McLaine Merrick either, who lives in Peachtree Corners, Georgia, coincidentally only about 10 miles southeast of Colonial Pipeline’s headquarters. Merrick said he’s got an almost full tank right now and works just about a mile from his home, but he’s hoping he doesn’t have an emergency.

Colonial said Tuesday night it has taken delivery of an additional 2 million barrels of gasoline from refineries for deployment upon restart, but didn’t give any more details about when that could be.