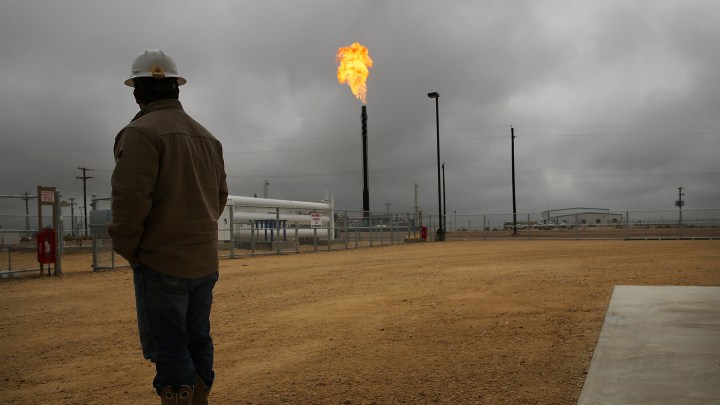 COPY
A gas flare burns at a Permian Basin plant. A study found that companies in the region wasted $750 million worth of natural gas in 2018. Spencer Platt/Getty Images

A gas flare burns at a Permian Basin plant. A study found that companies in the region wasted $750 million worth of natural gas in 2018. Spencer Platt/Getty Images
Listen Now

Oil wells in Texas produce a lot of excess natural gas, and the Texas Railroad Commission, the group that regulates oil and gas in that state, said Tuesday it’s implementing changes in the hopes of reducing the amount that gets burned off in a process called flaring.

“We’re flaring about 1% of U.S. production,” said Robert Kleinberg at Columbia University. That doesn’t sound like a lot, “but U.S. production is very large, and 1% is the equivalent of supplying something like 7 million homes,” he said.

Flaring natural gas is a waste. Companies flare because natural gas is cheap, and figuring out a way to use it is often more costly than just burning it.

“If you’re way out in West Texas with no convenient pipe, or if pipeline transportation costs are higher than what you get at the marketing hub, then you’d flare it because there’s no economic driver for saving it,” Kleinberg said.

The Institute for Energy Economics and Financial Analysis found that oil companies operating in the Permian Basin of West Texas wasted $750 million worth of natural gas in 2018.

“Increasingly, you’re seeing third-party data collection operation through drones, satellites and flights, which are collecting and beginning to make public very, very granular data,” said Varun Rai, director of the Energy Institute at the University of Texas at Austin. “And that’s just bringing a whole different level of scrutiny of the operations.”

On Tuesday, Texas regulators told oil companies they must offer more thorough justifications for why they need to flare. In part, that’s to curb damage to the environment. Flaring emits carbon dioxide, methane and other pollutants into the atmosphere, contributing to climate change and poor air quality near refineries.