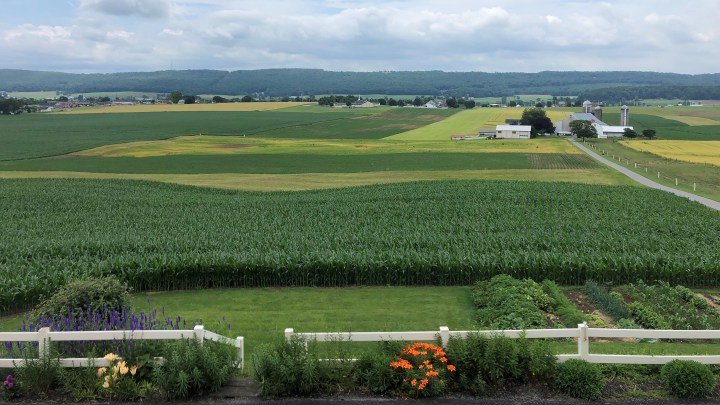 Edward Kurtz says he takes comfort in living on a plot of land his grandparents farmed in Morgantown, Pennsylvania, a rural community at the edge of the state’s Amish and Mennonite country.

But a neighbor set to be built just across the highway has the former Mennonite pastor on edge. Hollywood Casino Morgantown, received a state license earlier this month.

Hollywood Morgantown is expected to be the first of five new “mini casinos” authorized by Pennsylvania legislators in 2017. The national casino and racetrack operator Penn National Gaming hopes to open it by the end of 2020.

The casino’s supporters say it will be a major economic boost to the region. But some residents say a casino of any size is a bad fit for this area, where it is not uncommon to see families travelling by horse and buggy.

Eighty six-year-old Paul Stoltzfus grows corn, wheat and alfalfa with his sons and grandsons on their farm on the edge of Morgantown. Stoltzfus, who is Amish, says a casino threatens his community’s “simple way of life.”

A petition to stop the casino presented at a March community meeting gathered more than 1,000 signatures; a petition in support only had about 150. The meeting stretched out for more than three hours, with most speakers arguing against the development. They cited concerns about gambling addictions, a potential increase in crime and fear that it would change the area for the worse.

But the casino has had the backing of local business and labor leaders, as well as politicians like Allen Styer, chairman of the board of supervisors of Caernarvon Township, which encompasses Morgantown.

“Currently, we are a community that has a lot of travel through the community, but we are not a destination place,” Styer said. “We should have, possibly, some restaurants … interested in coming to the community with the additional people expected to patronize the casino.”

Styer said the township’s current annual budget is about $2.6 million dollars. Penn National Gaming estimates it will increase that by an additional $1.6 million every year.

“We would have to raise taxes like three times what they currently are to even come close to that kind of contribution,” Styer said.

Penn National Gaming spokesman Jeff Morris said the casino should create about 250 local jobs, with an average annual salary of between $40,000 and $45,000, plus benefits. The casino will be open 24/7, Morris said.

Clyde Barrow, a professor at the University of Texas, Rio Grande Valley, says he is skeptical of strong claims from either side of the debate about what effects the casino will have. Barrow has been studying casinos, particularly in the Northeast, since the early 1990s.

“Will it create jobs? Yes,” Barrow said. “Will you get the spin-off benefits of restaurants and motels and hotels? Probably not.”

But Barrow says that means the casino is also not likely to have a big effect on the area’s way of life.

“My suspicion is, based on my experience, that if this casino is built, given its size, once it’s up and running, most people won’t even notice it’s there,” Barrow said.

Edward Kurtz, however, said his close proximity to the proposed casino means he won’t be able to escape it. He said he’s discouraged the casino received a license, but he hasn’t given up: “We still pray.”