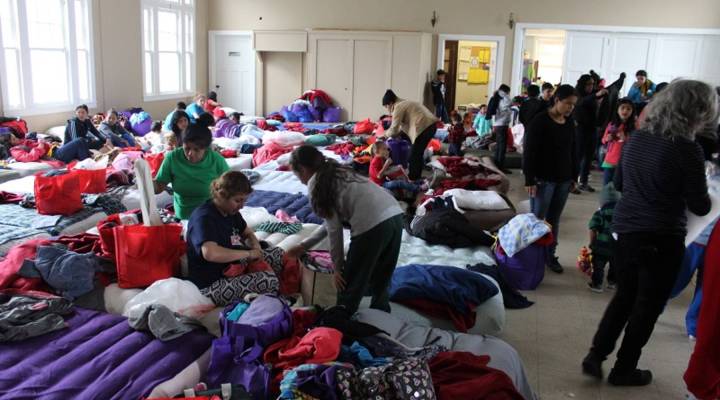 COPY
Central American women and children rest in a cafeteria of a San Antonio Mennonite church after being released from detention facilities in South Texas. Joey Palacios/Texas Public Radio

Central American women and children rest in a cafeteria of a San Antonio Mennonite church after being released from detention facilities in South Texas. Joey Palacios/Texas Public Radio
Listen Now

About 45 immigrant mothers and children arrive by bus at San Antonio’s Mennonite church. They only have their clothes and a few personal items after spending weeks in family detention. The pews of the sanctuary are rearranged and mattresses line the floor. The women and children started arriving by the dozens. Pastor John Garland welcomes them.

“We got a call that Immigration and Customs Enforcement was going to drop off close to 200 people,” he said.

Immigration and Customs Enforcement (ICE) released more than 500 Central American women and children from family detention centers in Karnes City and Dilley, Texas in December.Local churches and refugee groups helped take the women and children in. The releases come as immigration rights activists argue that children should not be held in detention facilities.

Women and children waiting to speak to immigration and asylum advocates wait in the church pews inside San Antonio’s Mennonite Church.

The release coincided with a state judge’s ruling that Texas could not license two family detention facilities as child care centers. The facilities are run by the for-profit prison companies CoreCivic and the Geo Group. In a statement, ICE said the release was part of normal operations and not related to the ruling.

Anna Perez, 37,  is from El Salvador and spent 15 days in detention. Speaking in Spanish, she said she fled to the U.S. to escape gang violence and death threats. The journey took several days. She and her daughter surrendered at the U.S. border.

Perez and her daughter were heading to Boston to stay with a friend she met in El Salvador, who purchased her two plane tickets.

Volunteers like immigration attorney Luis Medina helped the women get in touch with family across the U.S. Unlike Perez, he said many don’t have travel arrangements.

“For example, I’ve been receiving phone calls on my phone that I leant out to people and they’re trying to get a hold of their family members,” he said.

Erin Drawert, a local resident, and her three daughters donated groceries and decided to stay and help.

“They needed volunteers to help cook, clean, translate,” she said.

Justin Tullius runs a local refugee group.  He said judges will have the final say on whether the women and children will be granted asylum “and that’s to establish to the judge that they are in danger back in their country and to show the reason for the persecution that they face.”

Most of the migrants in this release were able to leave San Antonio  within days. Immigration officials say there are 2,500 immigrant women and children in federal family detention centers nationwide.

Is it ever OK to ask children to translate for their parents in emergency situations?