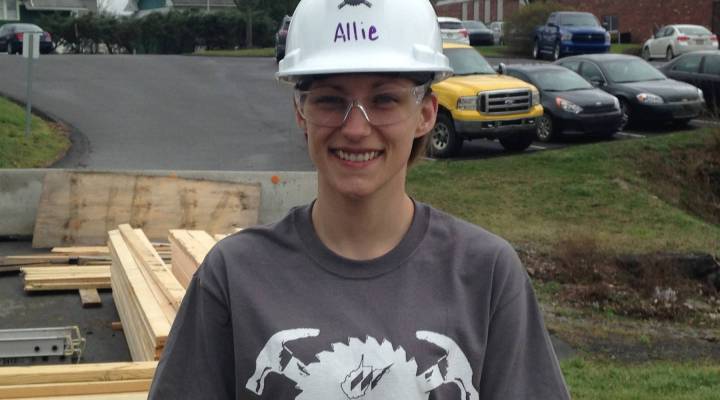 COPY
Allie Herrington is a student at a job-training program in Morgantown run by a nonprofit called West Virginia Women Work. She says training programs are a great investment of federal money. Nancy Marshall-Genzer

Allie Herrington is a student at a job-training program in Morgantown run by a nonprofit called West Virginia Women Work. She says training programs are a great investment of federal money. Nancy Marshall-Genzer
Listen Now

Before he left for his West Virginia trip, Federal Reserve Gov. Jerome Powell told me he accepted an invitation to visit Morgantown and speak at West Virginia University so he could hear first hand how the state is coping with issues like opioid addiction and unemployment, which is above five percent in West Virginia.

“I thought it was very important to get out and understand what’s going on in a part of the country that’s not doing so well even though at the national level things are pretty good,” Powell said.

The Fed can’t create jobs. It is responsible for monetary policy — that is, interest rates. And Powell said he realizes people don’t think a lot about the Federal Reserve or even know what it does.

“People, broadly speaking, go on with their lives and don’t pay a heck of a lot of attention to what the Fed can and can’t do, and I think that’s perfectly understandable,” he said.

You might think supporters of President Trump wouldn’t like the Fed. Trump won almost 70 percent of the vote in West Virginia. And Trump vilified Fed Chair Janet Yellen on the campaign trail, accusing her of keeping interest rates low to help former President Obama.

But the Trump voters I talked to about the Fed? They’re indifferent.

“I don’t really know what they do. No, I really don’t,” Shannon Morris said.

“I’m a dumb hillbilly that don’t know much about that stuff,” Jim Miller said.

“I don’t really know what they do. No, I really don’t,” says Shannon Morris of the Federal Reserve. She’s part of a group that meets once a week, selling items in a sort of communal yard sale.

Morris is a homemaker. Miller is a retired coal miner. (By the way, he was just joking about being a dumb hillbilly.) They’re sitting in lawn chairs in the parking lot of a park in Fairmont, just south of Morgantown. They’re part of a group that meets once a week, selling odds and ends out of the backs of their vehicles in a sort of communal yard sale.

Lydell Owens is a couple of cars down from Morris and Miller. He’s a general contractor and knows all about the Fed.

“What I believe they do is they deal with the interest rates,” Owens said.

Owens watches interest rates like a hawk. He knows if they get too high, people won’t take out loans for the home-improvement projects he does. On the other hand, he knows interest rates can’t stay low forever, because inflation would get out of hand. He’s already seeing prices go up at his local Family Dollar store.

“And I have seen their prices go 20, 30 percent. I mean, on everyday things, toilet paper, paper towels. They have just been going gradually up and up and up,” Owens said.

What would Owens say to Fed Gov. Powell if he met him?

“I know there’s a lot of people hurting,” he replied.

Up in Morgantown, Allie Herrington has a similar message. She’s a single mom and a student at a job-training program in Morgantown run by a nonprofit called West Virginia Women Work.  The program trains women for construction jobs. She said she looked for a full-time job for four years without success. Finally, she got a job working weekends at a Hobby Lobby store. She and her toddler son live with her parents. I ask, is she living paycheck to paycheck?

Herrington’s eye wells up as she answers.

Herrington’s message for Powell? Training programs like this one, which gets some federal money, are a great investment. I ask what this training opportunity means to her. “It means everything,” she said. “I definitely want to turn everything around. I want to be able to support myself and my child.”

Powell arrives at the training site as we’re chatting.

He sits down in a classroom and asks the program’s coordinator, Misty Nicholas, about the center and the local economy. He steps outside to watch the students build a shed, then heads across town to West Virginia University to give a speech on the history of the Federal Reserve.

Powell emphasizes that the Fed is designed to balance out national and regional interests.

“The Federal Reserve was not structured to be entirely private in its ownership and operation,” he said. “It was also not structured to have a single headquarters in Washington or New York with branches across the country.”

Powell was trying to make it clear that the Fed isn’t just interested in what’s happening on Wall Street and in the halls of Congress. It’s also got its eye on places like Morgantown, West Virginia.