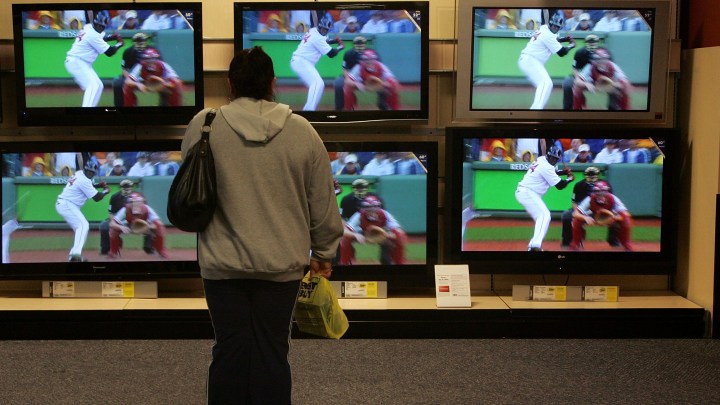 Many of the gains were posted in discretionary categories — products like electronics and sporting goods.

“The one I had was ripping, so it was a necessity,” he said.

Goldberg said he and his friends have been feeling more comfortable buying fun stuff.

“We’re all getting older. We’re all making a little bit more money in the past few years,” he said.

Michael Fusco-Straub, owner of Books are Magic of Brooklyn, says consumers seem more inclined to stop by his store.

“That must be reflective on the bigger picture, which is that people are doing alright,” he said.

Indeed, consumer balance sheets are in decent shape, according to Jack Kleinhenz, chief economist at the National Retail Federation. He was hitting up Father’s Day sales with his family Friday.

“Generally, at the national level, it (consumer spending) really gives us a stronger belief that the economy’s moving forward,” he said.

Tariff cloud on the horizon?

The Trump administration is considering a 25% tariff on an additional $325 billion worth of Chinese products, and the President has said he could still levy new taxes on Mexican goods.

“Do companies eat it in their profit margins, or do they start passing on the higher costs to consumers?” she said.

If retailers were to do that latter, she said, consumers might starting feeling less confident buying more electronics, books and gym bags.