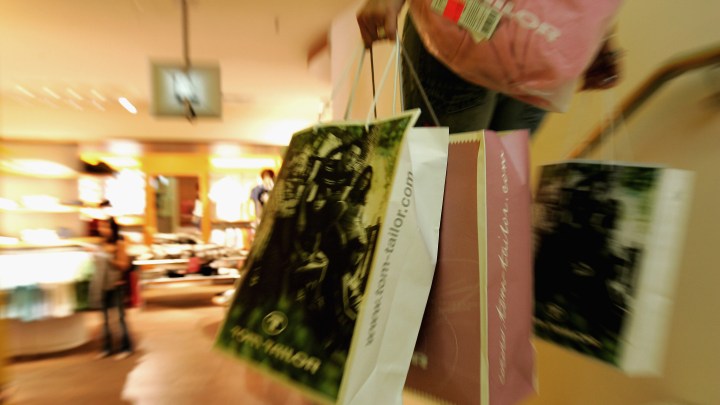 COPY
Retail sales fell in September, surprising experts. But it doesn't mean the economy is trending down. Andreas Rentz/Getty Images

Retail sales fell by 0.3% in September, in part because of lower gasoline prices, according to the Commerce Department. But several categories of discretionary spending were also weak: sales at building supply, home and garden stores were down 1% month-to-month; department store sales fell 1.4%; and sales at electronics and appliance stores were flat. Sales were more resilient at bars and restaurants, where they rose 0.2%, and clothing and accessories stores, where they were up 1.3%.

“But one month does not make a trend,” he said. “This is not a collapse in spending.”

Kleinhenz pointed out that surveys continue to show that consumers feel good about the job market and the prospect of continued wage gains, which will likely keep driving moderate strength in consumer spending.

But economic data over the past several months show spending is slowing, said CFRA retail analyst Camilla Yanushevsky. She said consumers are seeing some increase in retail prices thanks to U.S. tariffs on Chinese imports, and that’s likely to escalate in coming months.

“Trade tensions are going to continue to weigh on consumer wallets,” Yanushevsky said. “We’re expecting to see more pullbacks — similar to what we saw in September — into next year.”

Caroline Sharp, 36, of Studio City, California, has been pulling back. She and her husband work in the entertainment industry. A few years ago, business was booming and they both had more than enough work.

“So we moved to a nicer apartment and we both replaced our old, beat-up cars.” Since then, she said, “we’ve really plateaued. And I don’t know anybody who feels like they’re on an upward trajectory.”

In one sense, Jason Brown, 45, who teaches communications at Valdosta State University in Georgia, is on an upward trajectory: he recently got tenure.

But Brown said his income as a professor hasn’t gone up much over the past decade, so big purchases — like a home — are off the table. Still, he said, he doesn’t worry about pulling out his wallet for a meal or a night out.

“Perhaps I should be more careful about my discretionary spending,” he told “Marketplace.” “I’m sure if my wife hears this she will definitely agree.”