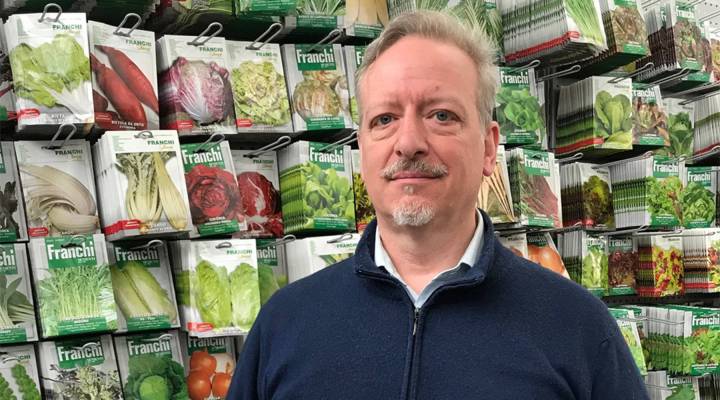 COPY
Paolo Arrigo is the director of Franchi Seeds. Courtesy of the BBC
My Economy

Paolo Arrigo is the director of Franchi Seeds. Courtesy of the BBC
Listen Now

While Brexit could technically happen anytime between now and Oct. 31, Prime Minister Theresa May is still negotiating the withdrawal within her own government, and the shape of Brexit remains unclear. Paolo Arrigo, the British seed importer for Franchi Seeds, has responded to the uncertainty by selling a “Brexit Vegetable Growing Survival Kit” full of seeds that growers could cultivate throughout the year. Arrigo tells the story behind those kits, and what it’s like to be a British seed importer right now.

My name’s Paolo Arrigo. I’m the director of Franchi Seeds, and I live in London and with my family: two children and a wonderful wife. What we specialize in is Italian varieties. There’s purple peppers there. There’s chiles of all shapes and sizes. As a company, as an importer, normally we just order seeds from Italy, and they arrive on a lorry. There’s no paperwork, there’s no barriers, there’s no delays.

Now, because of this whole Brexit process, we’ve had to prepare for a no-deal Brexit. We’ve had to apply for an EORI, which is a type of importation document. We’ve had to get a customs broker, like when we import goods from America or China. Now, all of these things have a cost to them. And that means that we will have to put our prices up. Guess what? If the price of seed goes up, the price of food goes up. This is flight school 1-0-1 stuff.

Britain is not self-sufficient. It’s estimated that less than half of the seeds in domestic seed packets actually come from Britain, and the remainder come from the [European Union], China, India. They come from all over. But we don’t have a big hobby seed industry in this country anymore.

So a bit of British humor: We came up with a “Brexit vegetable growing survival kit,” and basically it’s a selection of vegetable seeds. They’re varieties that you can sow all year. We’ve got some shelling beans, French beans there, or pole beans as they would be called in America. We’ve got some peas there, and peas can be preserved in jars, they can be eaten fresh. That was the thinking behind the kit: to have something to sow or harvest every single month of the year, varieties that can be preserved.

We came up with the idea one Saturday night after a drink and it was really a bit of a joke. But we mocked up the label. We launched it with a single tweet on Sunday morning and we’ve sold hundreds, we’ve almost sold 1,000 now just in the last nine weeks. But actually it’s been so successful that we’ve been thinking of doing another “Armageddon Vegetable Growing Survival Kit,” which has hit a lot of hilarity in the business. But then Brexiteers always did say that there would be Brexit opportunities for business. But I don’t think they thought it would be like this.

This series only works with your help. Let us know how your economy is doing using this form and your story may be featured on a future edition of My Economy.