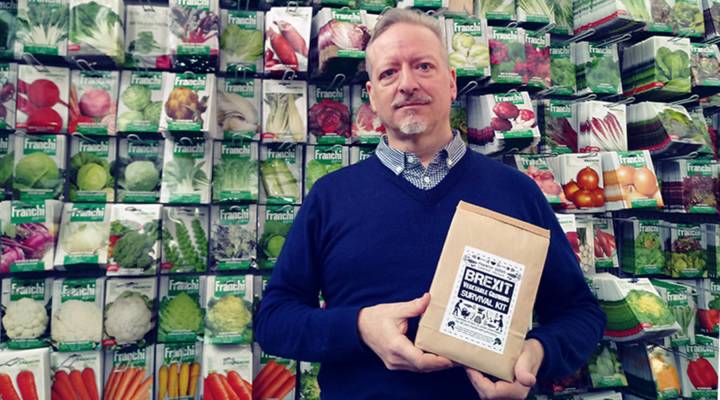 COPY
Paolo Arrigo of Seeds of Italy Ltd says his sales have more than doubled since fears of a no-deal Brexit began to grow a month ago. Stephen Beard/Marketplace
Brexit

Paolo Arrigo of Seeds of Italy Ltd says his sales have more than doubled since fears of a no-deal Brexit began to grow a month ago. Stephen Beard/Marketplace
Listen Now

The deadlock over the terms of the United Kingdom’s departure from the EU continues and the prospect of the nation leaving the bloc without an exit deal looms larger.

And that’s fueled an upsurge in stockpiling, which has reached the highest level in a G-7 country since comparable records began in 2007.  People and companies have been hoarding essential supplies out of fear that the deadline of March 29 will come without a deal, and that the flow of goods into Britain will suddenly be hampered by border checks, causing massive delays and shortages.

Jo Elgarf, who lives in a townhouse on the outskirts of London, is preparing for that possibility. Her larder is overflowing with emergency supplies.

“We have enough food here to feed our family of five for up to eight weeks,” she said. “Who knows whether we will need this or not? We’ve had no guidance from the government. I’ve got to think about my three children.”

Elgarf is not the only one who’s worried. In the month since she joined a small Facebook group called “48% Preppers” to share tips on stockpiling and “prepping” for Brexit, the group has grown to almost 10,000 strong.

“We have absolutely no idea what’s going to happen on March 29, so I think we have to plan for the worst. It’s no good the government saying, ‘Don’t stockpile.’ The retailers say they are stockpiling.  Manufacturers are stockpiling, too.” she said.

Jo Elgarf has stockpiled enough food to feed her family of five for up to eight weeks.

Manufacturers large and small are worried that their just–in–time supply chains may be disrupted by border gridlock.  British Boxers, a small clothing firm which makes up-market underwear and nightwear and gets most of its fabric from continental Europe, fretted about the fabric not reaching the factories in time to meet production deadlines.

“We decided to order the entire consignment five months early,” said the company’s co-owner Darren Price. “But that meant we were tying up thousands and thousands of pounds of capital buying the fabric before Christmas, when we should have been spending that money on marketing and promoting our products during our biggest sales period,” he said.

Brexit anxiety is proving a boon for some companies, like Emergency Food Storage UK. The company sells food and hydration kits for aid agencies working in disaster zones, and co-founder James Blake hit on the idea of a Brexit survival pack.

At around $380 a pop the survival pack isn’t cheap, but Blake insists that if food supplies dwindle after a no-deal Brexit, the box will keep someone going for at least a month.

“In the Brexit Box we’ve got 60 main meals. It’s freeze-dried, so you just add water, and it goes back to its original state. It’s nutritious. Really it’s designed for emergencies, so it has all the calories you need.  It tastes pretty good too,” Blake said.

Not as good as fresh food, though. And that is particularly at risk from a no-deal, disorderly Brexit.  Britain imports roughly half of all of the fresh produce it consumes, much of it from continental Europe.

Some Brits anxious about fresh food supplies have flocked to a small company based in North London. Seeds of Italy Ltd. distributes seeds for a mouthwatering array of vegetables, and the boss, Paolo Arrigo, says his sales have more than doubled since fears of a no-deal Brexit began to grow a month ago.

“This is what people are doing. Some people feel that they need to be growing their own vegetables in order to ensure that they have fresh vegetables, which can’t be stockpiled. We’ve had a lot of customers recently who have never grown vegetables before,” Arrigo said.

Since he imports the seeds from Franchi, an Italian company, Arrigo is also worried about Brexit delays affecting his imports. He’s also tried to stockpile  his products.  But he hasn’t managed it yet: As soon as a huge new batch of seeds arrives, they fly off the shelves.

“Seeds have always, through time, sold better in a crisis than in a boom. People have to eat.” he said.  That’s great for his bottom line, but he says this level of anxiety — this level of stockpiling — cannot be good for the British economy.