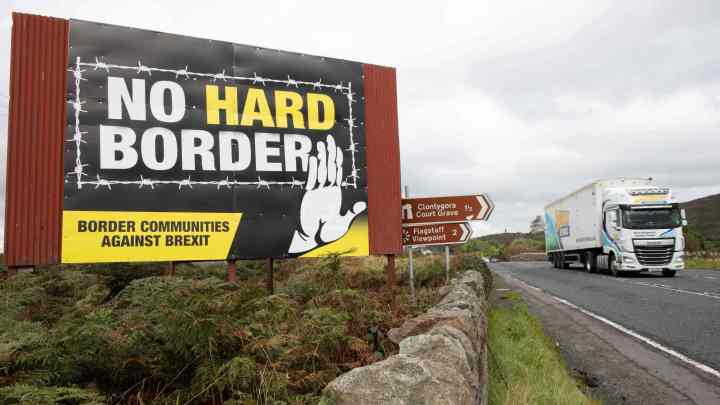 COPY
The Northern Ireland Protocol was meant to effectively keep the province in the EU but has led to unintended consequences. Paul Faith/AFP via Getty Images
Brexit

The Northern Ireland Protocol was meant to effectively keep the province in the EU but has led to unintended consequences. Paul Faith/AFP via Getty Images
Listen Now

The U.S. is once again getting dragged into the Brexit imbroglio. The European Union and the Irish government have appealed to President Joe Biden to step in and pressure the United Kingdom into fully implementing the so-called Northern Ireland Protocol.

That’s the bit of the Brexit settlement that seeks to ensure there is no hard border, with customs checks and other trade barriers, on the island of Ireland. It does this by, in effect, keeping the British province in the EU.

The trouble is, the protocol is imposing a different hard border, one in the Irish Sea between Northern Ireland and the British mainland, and this is disrupting trade between two parts of the same country.

“This has had a huge impact on our business” said Kieran Sloan, boss of Sawers deli in Belfast. “Things like cheese are in short supply. We haven’t had any English cheese delivered for over two months.”

Some of Sloan’s suppliers that are based on the British mainland balked at the paperwork and the extra cost of getting their products into Northern Ireland, now effectively an EU territory.

“Two of our big cheese suppliers have said they’re not supplying Northern Ireland anymore. So that’s it,” Sloan said. “And a lot of our Mediterranean companies that are based in London have just stopped as well.”

Sloan’s supplies of meat, olives and dried herbs have been disrupted. Supermarkets and other stores across the province have also been affected.

Garden centers have been hit the hardest. Under EU biosecurity rules, British soil is now banned from entering Northern Ireland. That ban, said Robin Mercer of the Hillmount Garden Centre in Belfast, has severed a vital supply chain.

“All of our plants come from England. We’ve been buying them there for many years. Now, we cannot get them due to rules and regulations. What they’re saying is: ‘Any plants grown in British soil will not be allowed in,’” Mercer said.

The EU and the Irish government insist that the protocol is a vital part of the Brexit withdrawal treaty. They say it is needed to prevent goods from outside the EU’s customs union and single market from flooding into the bloc unregulated. And, they say, it is needed to preserve the peace established in Northern Ireland more than 20 years ago by the U.S.-brokered Good Friday Agreement, which brought an end to decades of bloodshed. By keeping the border between north and south wide open, they argue, the protocol avoids inflaming the large minority in the province that wants a united Ireland.

But by imposing a border between Northern Ireland and the rest of the U.K., the protocol has inflamed members of the unionist community, which wants to remain British.

“This has been an unmitigated disaster,” Ian Paisley Jr., lawmaker for the Democratic Unionist Party, told the U.K. Parliament earlier this month.

“The protocol has betrayed us and has made us feel like foreigners in our own country,” Paisley said. “Imagine a border between Texas and the rest of the U.S.”

Steve Aiken, leader of the Ulster Unionist Party, compared it to the idea of Canada or Mexico dictating what food Americans are going to eat.

“Can you imagine anyone in the United States putting up with it?” Aiken asked. “Definitely not. This is the kind of thing any normal democracy wouldn’t put up with. People here are very, very angry about this.”

Other critics of the protocol assert that far from upholding the Good Friday Agreement, it actually breaches it.

“The Good Friday Agreement says there should be no significant change in the constitutional status of Northern Ireland without the agreement of the Northern Ireland Assembly. But there has been a significant change which the assembly hasn’t agreed to,” said Graham Gudgin, a Cambridge academic with a long history of involvement in the economic and political life of the province.

Gudgin said Northern Ireland had been made subject to rules and regulations imposed by a foreign entity over which it had no democratic control. “Regulation without representation is a notion that should have some resonance with Americans,” Gudgin observed.

The British government has upped the ante over the protocol. Prime Minister Boris Johnson unilaterally postponed the implementation of further border controls, a move denounced by the European Commission and the Irish government as a breach of the U.K.’s treaty obligations.

Aodhan Connolly, director of the Northern Ireland Retail Consortium, which represents a wide swath of the province’s retailers, described the British move as “really helpful” and “very much needed” because, he said, even tougher border controls were “a big train coming down the track.”

But Connolly criticized the British government for acting unilaterally. “We want the U.K. government and the EU to work together. We need to remind both sides that in the treaty they committed to implementing the protocol with the least disruption to the Northern Ireland communities. That has not happened. There has been disruption,” he said.

Connolly, however, acknowledged that by pursuing a hard Brexit, by leaving the EU’s customs union and single market, the U.K. government has ensured that there will be some border controls and trade friction with the EU. And that if the EU makes concessions to the U.K. over Northern Ireland, other neighboring countries outside the bloc will demand similar, favorable treatment.

That doesn’t wash with Steve Aiken, leader of the Ulster Unionist Party.

“There’s no reason why the U.K. and the EU cannot sit down and come up with an arrangement that means there’s no border with the [Irish] Republic and no border between Northern Ireland and the rest of the U.K.,” he said.

“You cannot tell me we can’t make an exception for Northern Ireland, particularly since this protocol is undermining the peace process, and everybody said, ‘Whatever we do, we’re not going to undermine the peace process,”’ Aiken added.

Meanwhile, some businesses in the province have been working around the new obstacles, but in a way that has further fueled unionist anxieties. Kieran Sloan of Sawers deli has increasingly turned away from the British mainland to suppliers in the Irish Republic in the south.

“We’ve been buying all our Spanish meats, all our Italian meats, all the charcuterie, all the cheeses, all the olives through the south. And it seems to be working,” he said.

Sloan thinks that many other Northern Ireland businesses formerly dependent on supplies from the rest of the U.K. may end up doing the same, “as an easier way to do things,” he said.

Unionists fear that by forcing deeper economic ties with the south, the protocol could be stirring movement in the direction of a united Ireland.