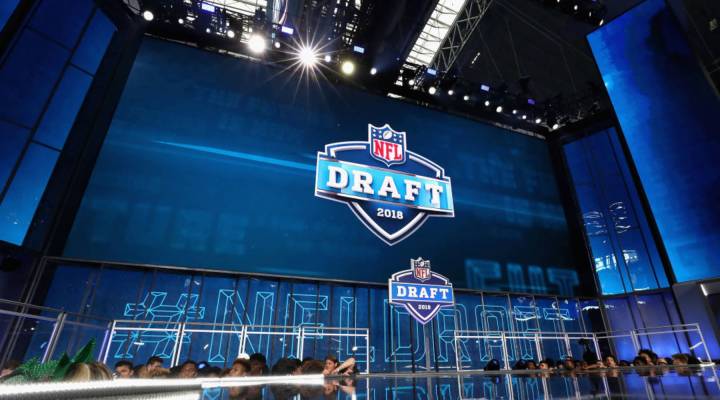 The 2018 NFL Draft logo is seen on a video board during the first round of the 2018 NFL Draft at AT&T Stadium on April 26, 2018 in Arlington, Texas.  Ronald Martinez/Getty Images
Listen Now

In some ways the NFL draft, which begins Thursday, is like picking stocks.

A team’s general manager is like an investment manager. Both have to build a balanced portfolio and manage risk. Both sometimes pay too much for glamour instead of going for more solid, steady performers. For a GM and a money manager, there is extensive research and increasingly sophisticated analysis to perform, as well as surprising value to be found in undervalued assets.

Investment decisions can be tricky

For every Peyton Manning, there’s a Ryan Leaf. Manning, drafted number one overall by the Indianapolis Colts in 1998, set passing records and won two Super Bowls. He was a good investment.

Leaf, selected by the San Diego Chargers in the number two position, is considered one of the greatest draft busts in NFL history. For an investor, Leaf might be described as a kind of a Pets.com: looked promising, but wasn’t.

“There really is no such thing as a sure thing,” said Cade Massey, practice professor and faculty co-director, Wharton People Analytics. Massey co-wrote a paper with Richard Thaler on market efficiencies in the NFL draft. He’s also a consultant on draft strategy to NFL teams and said he asks general managers to consider several factors in decision-making.

“Do you have the patience and the risk tolerance to wait another round, for example, until you think the price is right?”

Patience, risk tolerance, the right price. Words you might hear coming from any old investment adviser.

Everyone wants big returns all the time, but …

Not every investment is going to work out like Tom Brady, he of six Super Bowl wins, taken as the 199th pick in the 2000 draft. A value pick if there ever was one.

“It’s almost impossible to consistently outperform the market,” Massey said. “This is something we’ve learned over time in the financial markets, but it turns out to be true in the NFL draft as well.”

In other words, past performance is no guarantee of future results.

Hoping for your train to come in

Gerry Knotek sees similarities between his job and the NFL draft. He’s a financial planner in Cleveland, and a season ticket-holding Browns fan. He’s watched the team rebuild for years.

That’s because, in last year’s draft, the woeful Browns grabbed quarterback Baker Mayfield, who looks good so far. Knotek wants to believe his Browns are one more good draft pick away from winning, but reminds himself to think about football with his financial-planner brain.

“A lot of times, if you’re investing for the long term, you greatly increase your probability of hitting your goals,” he said.