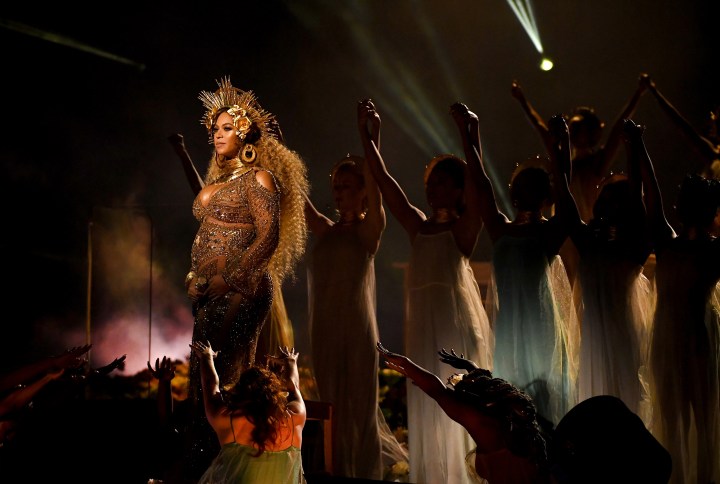 It’s no surprise Beyoncé has made waves across Hollywood and beyond. The multimillionaire is an award-winning singer, actress, entrepreneur and mother who has broken records and shattered ceilings. Wednesday she surprised fans with a live album from her 2018 Coachella concert.

So we thought, there’s no day like today to take a look at her mountain of accomplishments.

Without further ado, here’s Bey, by the numbers.

In 2018, Beyoncé ranked as the the 35th highest-paid celebrity in the world, according to Forbes. That same year, Forbes estimated her net worth totaled $355 million. Combine that with husband Jay-Z’s $810 million fortune, and the duo is worth over $1 billion.

Beyoncé has topped the Billboard charts at least 10 times throughout her career, with songs including “Irreplaceable,” “Crazy in Love” and “Single Ladies (Put a Ring on It).” Eighteen other songs she was featured in or had involvement in also broke the top 10.

Over the last three decades, Beyoncé has won 23 Grammy’s and has been nominated for 43 others. Her first three wins came from her Destiny’s Child days with Kelly Rowland and Michelle Williams between 2000 and 2001. Since then, she has won awards in top categories including song of the year, best music video and best R&B album.

She has also won a number of other awards including a Peabody, multiple Webbys, and most recently, the 2019 GLAAD Vanguard Award, alongside Jay-Z, for promoting equality and acceptance of LGBTQ people.

Over the last six years, Beyoncé has surprised fans by dropping three albums, including “Lemonade,” “Everything Is Love” and “Homecoming: The Live Album.”

It’s not known how much headliners are paid at Coachella, but it’s estimated Beyoncé made more than $3 million for her two-weekend performance in 2018.

But Beyoncé doesn’t just run the music world. She has stakes in a number of business ventures including Ivy Park, an athleisure clothing line, Parkwood Entertainment and 22 Days Nutrition, a vegan-based meal service.

Beyoncé announced in April that she would be collaborating with Adidas to create a line of new products, including shoes and other products, and relaunch Ivy Park. In November, Beyoncé bought out Topshop head Philip Green’s 50% share of Ivy Park, making her the sole owner of the clothing line.

She also holds a stake in Tidal, an artist-owned music streaming platform founded by Jay-Z. “Lemonade” was exclusively released on the platform in 2013 and is currently unavailable for streaming on any other platforms, including Spotify, where Beyoncé has over 24 million listeners a month. And if you were holding out for “Lemonade’s” release on Spotify, it doesn’t look like it’ll be dropping anytime soon.

In 2014, Beyoncé led Time’s 100 Most Influential People list and was subsequently profiled by Sheryl Sandberg, Facebook’s chief operating officer, for the magazine. This year, Beyoncé wrote the profile for Michelle Obama, who made the list.

Beyoncé is also a top social media influencer. Her Instagram account, which has a healthy following of 127 million as of this article’s publishing, was the first account where posts were worth $1 million each.

Although she’s no longer the only celebrity making that much per post, she’s probably doing just fine. After all, she can escape to the $20 million private island Jay-Z bought her when she needs a break from her business empire.