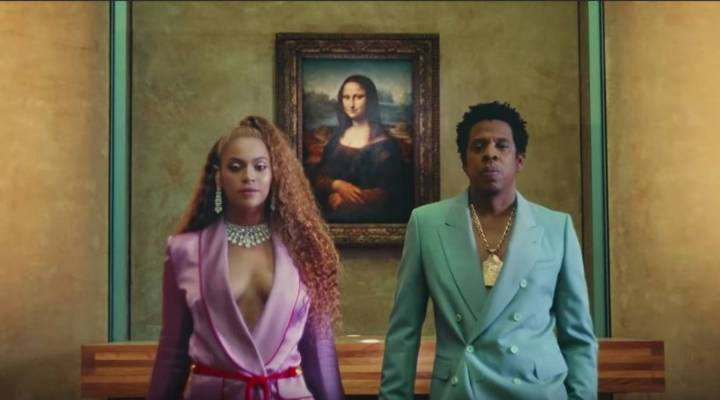 COPY
Beyoncé and Jay-Z's music video was shot in various parts of the Louvre in Paris. Beyonce/YouTube

Beyoncé and Jay-Z's music video was shot in various parts of the Louvre in Paris. Beyonce/YouTube
Listen Now

After dropping a new album, “Everything Is Love,” in the middle of their “On the Run II” tour this weekend, Beyoncé and her husband, Jay-Z, also released a new music video for their song “Apes**t.” What makes it so unique? They shot the music video in the Louvre in Paris, surrounded by classical art.

With over 14 million views to date, the music video has gone viral since its release Saturday. Marketplace host Kai Ryssdal talked to Danielle Young, a writer and producer at The Root, about some of the art featured in the music video and some of her other thoughts on the couple’s first joint album. The following is an edited transcript of their conversation.

Kai Ryssdal: So let me get your quick off-the-cuff reactions. I want to talk specifically about the video, not the album itself, but the video first. Holly cow, that was cool, I thought.

Danielle Young: Man, listen, Beyoncé and Jay-Z have this just innate ability to just stop us cold, stop the world cold. Just to see it in the Louvre and to see these different shades of beautiful blackness and even in the different shades of nude ballerina gear. It was just like, wow, like Beyoncé and Jay-Z are so brilliant for using their art to just say so many things, especially now when we need the affirmations as black people that, you know, our lives do matter and we have this chance to actually live and experience art. And it’s inspirational, and I really hope people are gravitating towards culture and things like that.

A scene from Beyoncé and Jay-Z’s “Apes**t” music video.

Ryssdal: To the marketplace slice of this thing, it’s their first joint album. It dropped unusually in the middle of a tour. I mean, there’s a whole bunch of “No, you don’t do this in the music business,” that once again, Beyoncé is saying, “I can do anything I want.”

Young: Absolutely, anything she wants to do, and to have Jay-Z in tow, it’s like reminiscent of the best of both worlds and having two artists who are incredible come together to prove that it doesn’t matter what rules are. Like, “I will drop an album in the middle of a tour, and you will know the songs by tomorrow.”

Young: Like, people are likely going be singing along when they first perform these songs as a part of the “On the Run” … “On the Run II” tour. That’s a tongue twister.

Ryssdal: I don’t want to mix my artistic metaphors here, but roll with me on this one. I saw “Incredibles 2” this weekend, it was very female-focused, right? Elastigirl is in the front. And this thing, you mentioned Jay-Z. But he’s like an afterthought. This is all Beyoncé. This is all women, the dancers are all women. It’s all about empowering the woman.

“It’s a beautiful display of forgiveness and love,” Danielle Young of The Root says about the lyrics on the Carters’ new album. Above, a scene from the video “Apes**t.”

Young: Yeah, it is very much a view on womanhood, black womanhood specifically. And what I love about marriage of Jay-Z and Beyoncé is that he is his own star enough that he doesn’t have to step in front of her. He knows that Beyoncé is the thing that we are going to gravitate towards, she is the thing that we’re going to lift up on high. But for them to have this as the Carters, and for him to treat his queen in a way that it’s like, “Now I know it’s about a woman, I know I’m going to step back and let you speak for black women and show men how to stand there and be there for for black women.” It’s beautiful.

Ryssdal: Worth a mention here that they are clearly using their art as some kind of public therapy, right? I mean, they’ve had issues in their marriage. And there was “Lemonade” and then there was his response. And they’re working this out in public.

Young: Yeah. I mean, that’s what I love about this. Because Beyoncé is not typically known as that type of artist who wants to show her personal, her vulnerable side. But she’s been doing that a lot more over the last couple of years, especially since she’s become a mother. And to even do so by even having lyrics — and one of the songs, “Love Happy,” she said he messed up on the stone. So to be that vulnerable and that open, especially for men and women who go through that, it’s a beautiful display of forgiveness and love. I just love them. I’m not over it.