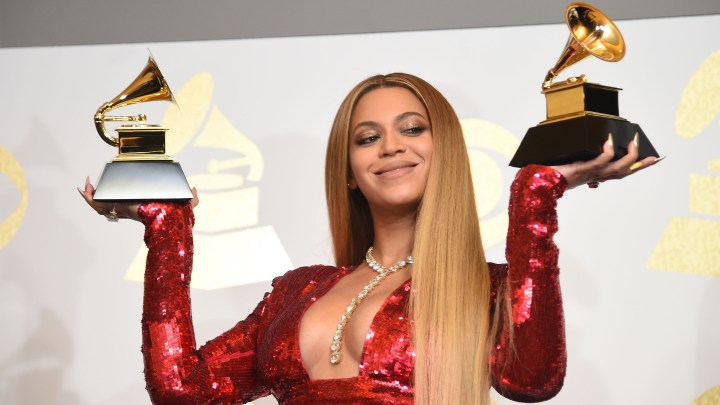 Beyoncé poses with her Grammy wins at the 59th Grammy Awards in 2017 in Los Angeles, California. Robyn Beck/AFP via Getty Images
By The Numbers

Beyoncé poses with her Grammy wins at the 59th Grammy Awards in 2017 in Los Angeles, California. Robyn Beck/AFP via Getty Images

The glitz and glam of the awards season continues this weekend with the music industry’s  biggest night on Sunday — the 62nd Grammy Awards. If last year’s ratings hold steady, nearly 20 million people will tune in to watch as Hollywood’s biggest music stars give each other 24 karat gold-plated gramophone statuettes.

Over 60 years ago, the biggest stars of music gathered in the Grand Ballroom of The Beverly Hilton hotel for the inaugural Grammy Awards. Frank Sinatra, Sammy Davis Jr. and Dean Martin suited up in their best black tie to watch as Grammys were awarded in 28 categories — far fewer than the 84 to be awarded Sunday.

Sinatra led the nominees that May day, with a grand total of six nominations. While he didn’t win for singing, he didn’t go home empty handed, snagging an award as art director for Best Album Cover. Over his lifetime, Sinatra racked up 31 nominations and nine wins.

The person with the most Grammy Awards might not be a household name, but he was certainly important to the industry. Conductor Georg Solti was awarded a record 31 Grammys over 35 years, and received the lifetime achievement award in 1996.

Alison Krauss is the woman with the most Grammys, at 27, but Beyoncé is not far behind with 23. And Beyoncé has been nominated 70 times, more than any other woman.

Beyoncé could certainly get a workout in with all her awards, as the statue itself clocks in at six pounds. For more than four decades, John Billings has been hand-crafting the Grammy Awards. Billings and his three-person team work out of a small workshop in Ridgeway, Colorado, where Billings is known as the “Grammy man.” The trophy is made from gold-plated “grammium,” a proprietary zinc alloy that has been specially formulated and trademarked. Each award takes 15 hours of craftsmanship.

The Grammy handed out on stage is actually a prop that’s used year after year — winners receive their genuine statue a few weeks after the show when the base has been engraved with their name and category.

While the material itself isn’t particularly valuable, the gramophone statues have gone for as high as a reported $187,000 at auction. But the real value comes in what’s known as “The Grammy bump.” Forbes reports that “a sampling of performers and producers shows a “Grammy bounce” of at least 55% in concert ticket sales and producer fees during the year following a Grammy win.”

Winners are decided by peers, with voting academy members including “performers, songwriters, producers, engineers, instrumentalists and other creators currently working in the recording industry.” Academy dues come to $100 a year. Voting members vote in four categories — Album Of The Year, Record Of The Year, Song Of The Year, and Best New Artist — and up to 15 others, but are encouraged to vote only in their areas of expertise.

That process has been called into question recently following controversy surrounding the Recording Academy’s latest president, Deborah Dugan, who was named president and CEO of the academy last year and suspended less than six months later. The first woman to hold the post in the 63 years of the academy, Dugan was hired in an effort to increase diversity and equity in the academy; its board is reportedly 65% male and 65% white.

Dugan has also alleged that the awards have been rigged, suggesting that artists who did not pass the first round of voting were suddenly on final round ballots. The academy has denied the allegations.

Rigged or not, millions of people will tune in on Sunday to see whether Beyoncé wins the four Grammy awards for which she’s nominated.