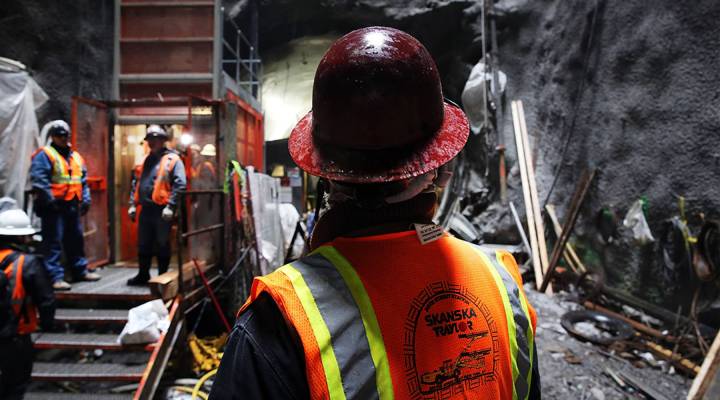 The ability to send trains hurtling through underground tunnels remains one of the great feats of human ingenuity, but it doesn’t come cheap. That’s especially true in the U.S., where rail costs routinely exceed other nations.

As it sprints to build miles of new subway lines before hosting the 2028 summer Olympics, the City of Los Angeles brought in an independent consultant to recommend cost-cutting practices. For instance, the Los Angeles County Metropolitan Transportation Authority now sends scout teams out, ahead of construction, to search for any unmarked power lines or other utility equipment in the path of tunneling that could cause delays.

On the corner of Wilshire and La Brea, dump move trucks in and out of a staging area for the first leg of the nine-mile Purple Line extension. It’s tightly-coordinated. A truck moves under an excavator, which heaps into the truck bed dirt from the tunneling site 90-feet below; the truck pulls away and another inches under the excavator. “The dump trucks are as important to the project’s schedule as the tunnel boring machine,” said Rick Clarke, the project manager.

Despite the planning, Metro estimates the extension will cost about $1 billion per mile — three times the norm in other countries. Why is it so expensive?

“That’s a good question,” said Clarke. “Sometimes I ask my staff, when did projects start costing so much?”

An excavator loads dirt from the tunneling site into dump trucks at a staging area for the Los Angeles Purple Line extension.

Google around, and you can find lists of commonly–cited reasons for why U.S. projects cost so much. To name a few: the high costs of labor agreements and union contracts; strong property rights and expensive land driving up acquisition costs; and the complexity of American projects due to the density of the cities that subways must travel through.

But Tracy Gordon at the Tax Policy Center says all of these are issues that other countries contend with, too. “What’s interesting is how you can come up with a counter example for almost every explanation,” said Gordon.

Levy, the researcher, who is based in Germany, is studying differences in international costs like this. He believes these types of “explanations” for increased rail expenses in the U.S. are really just excuses.

On labor cost: “100%, excuse,” said Levy. “In the Nordic countries, where the majority of the labor force is unionized, the costs are pretty low. In Texas, a right-to-work state, costs are basically the same as in, let’s say, Massachusetts.”

On property rights: “In Japan, or France, if the landowners aren’t happy, they riot. In the United States, the best they can do is ask for a little bit more money.”

On density: “It’s the exact opposite,” said Levy. “Usually, American cities are less dense, so you’d expect costs to be lower.”

Transit experts like Levy and Gordon have suspicions about what could truly be driving U.S. costs above other nations. Neither of them is the first to note that any given project may require a tangle of local, state and federal agencies to sign off on it, or fund it, potentially creating excessive bureaucracy.

Due to the objections of a few vocal constituents, individual local officials or lawmakers may also have more power to impede a project or change its course. The bidding or planning processes typically used by U.S. cities may contain flaws that other countries don’t have — for instance, a reliance on formulas that award the lowest-bidding contractor the work, even if that contractor has a history of coming in over budget, ultimately.

Where other countries generally build smaller subway stations, where riders walk down directly to the track level, subways in the U.S. almost always include huge, multi-level stations with mezzanines.

But we don’t know

Levy says these are really just theories. “It’s the sort of thing we need to study more,” he said. But he thinks there’s an underlying philosophy in the U.S. that has allowed these costs to fester — and it’s the same reason that we don’t know what they are. “In the United States, they never look at best industry practices outside the U.S.,” Levy said. “It’s kind of jarring.”

When LA Metro brought in its outside consultant to make cost-control recommendations, it analyzed eight other transit agencies. Only one was from outside the U.S.: London, which is currently building Europe’s most expensive subway, the Crossrail.

For Clarke’s part, he says he’d welcome a trip abroad. “Personally, I’d like to have my boss send me to Spain and France and Germany, to find out how they’re doing it,” said the overseer of LA’s subway projects. “And, actually, it would be a good, valuable thing.”