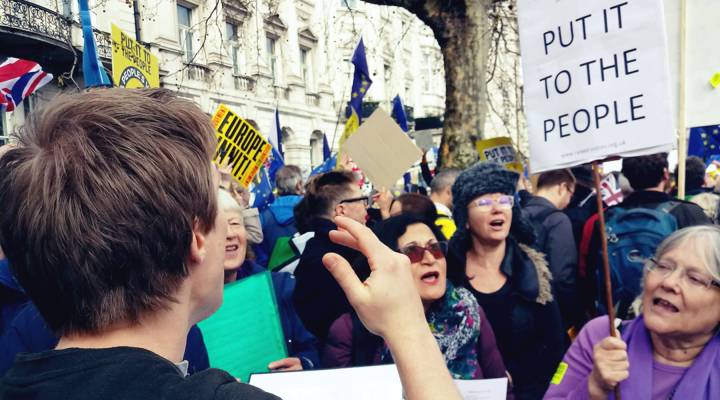 The United Kingdom is in uproar over Brexit, with parliament in turmoil and a country divided between “Leave” and “Remain.” But amid the cacophony of protest and disagreement, some harmony has emerged. Political choirs, or protest singing groups — which have existed in the U.K. for decades — have been more active than ever, thanks to Brexit.

Marketplace met up with a North London group, Raised Voices, as it rehearsed before a recent rally where protesters called for a second referendum on U.K. membership of the European Union. Raised Voices has been singing at demonstrations for more than 30 years. Its performances have lent support to many causes, from fighting poverty to the campaign against climate change and, more recently, have been expressing support for continued U.K. membership of the EU.

“Being in a community with other singers, being part of something that’s bigger than just yourself, is really empowering,” said choir member Deborah Arnott. “It’s a visible demonstration of acting in a community.”

Rosemary Snelgar, another member, said she believed choral singing was a great way to get a political message across. “There’s an emotional component when people hear singing, even if they can’t sing themselves,” she said.

The choir draws on a repertoire of traditional protest and liberation songs, each adapted to suit the cause at hand. “A Luta Continua” (“The struggle goes on”) is a revolutionary song from Spain, while “Bella Ciao” (“Goodbye, beautiful”) is an anti–fascist anthem from wartime Italy. Its lyrics, heavily modified by Raised Voices, are as follows:

And we are marching.

We are saying no to Brexit.

There is strength in unity.”

The Raised Voices political choir in rehearsal for the anti-Brexit Peoples Vote rally in London.

In the quiet of a rehearsal hall in north London, the choir’s songs rang out with crystal clarity. But in the middle of the “People’s Vote” rally in central London, the singers did not fare quite so well. They were often drowned out by cheering, chanting, drumming, even bagpipe-playing from a crowd of an estimated one million people. Nevertheless, when Raised Voices did filter through the racket, it proved very effective. Protesters frequently stopped and applauded the performance, and the choir members themselves had no doubts about the value of protest singing.

“You’ve got to get out there and show you’re not happy about the way things are going,” said Thea Thompson, a 14-year veteran of the choir. “I’m passionately pro-remain. We must show our support for democracy.”

Brexiteers, who say they’re the ones that are upholding democracy, have not inspired the same choral support as the Remainers. Maybe they’ve missed a trick. The protest choirs seem to offer a rare note of accord in the growing discord of Brexit.