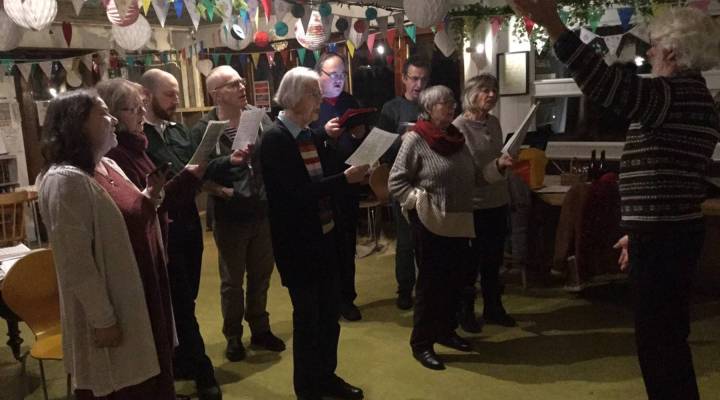 Think of a protest song and you will likely conjure up an image of a lone, denim-clad singer strumming an acoustic guitar and railing against all the evils of the world. But there is an older tradition of musical protest, and it’s undergoing a revival in Britain: the protest choir. Groups of choral singers have, in recent years, been turning up at demonstrations and rallies around the country to vent their feelings about a whole range of political and economic issues. There are now three such groups active in London and dozens more around the United Kingdom.

With Brexit looming, and with the prospect of  more protest rallies in the 60 days remaining before Britain’s official departure from the European Union, Marketplace met with members of one of these campaigning choirs. The group calls itself Strawberry Thieves after a wallpaper design by the famous Victorian socialist William Morris.

The global financial crisis and the years of austerity that followed have provided the choir with a rich seam of discontent to tap. At a recent Sunday evening rehearsal in a snug little community hall in South London, the Thieves ran through some their repertoire. They sang:

Young and old and white and black join us here today.

We must defend our services and make the bankers pay!

We’re fighting for our future now and this is what we say:

No ifs, no buts , no public sector cuts

And in a diatribe against privatization, they sang:

they want to make a profit anyway they can,

In the name of efficiency.

The choir believes that protest or campaign singing is just as effective as chanting or waving a placard and adds that little bit extra to any demonstration.

“Singing is a very nice way of uplifting people’s spirits, I think, as they’re marching along together,” Hamilton said. “Chanting can be a bit tedious after a while, so it’s a change.”

There is a downside. Singers can be drowned out on a really noisy march, but choir members Cheryl Coyne and Martin Vickers insist they can still get their point across, in spite of the racket.

“To actually hear a song coming through the din, people really appreciate that and they respond to it,” Coyne said.

And Vickers chipped in: “They’ll respond to it and quieten down, and they’ll listen.”

Ironically, none of this choir’s  songs is about Brexit. That’s because, like the U.K. itself, the choir is split down the middle over the issue. Nevertheless, Hamilton is toying with the idea of a Brexit song.

That would be a coup for the protesting choir: bringing some harmony to the bitterest and most divisive issue in Britain today.