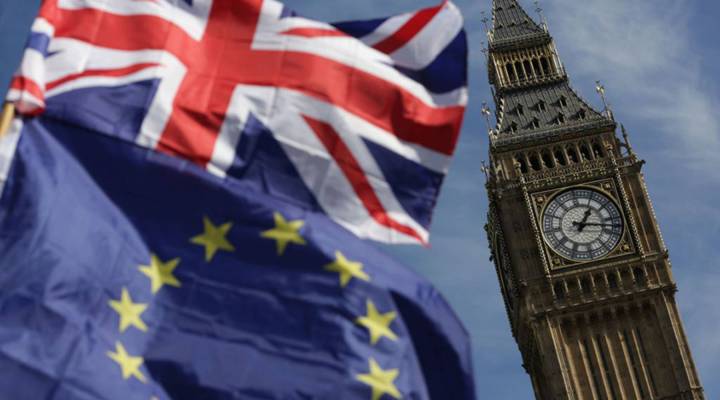 COPY
An EU flag and a Union flag held by a demonstrator is seen with Elizabeth Tower (Big Ben) and the Houses of Parliament as marchers taking part in an anti-Brexit, pro-European Union march enter Parliament Square in central London on March 25, 2017. DANIEL LEAL-OLIVAS/AFP/Getty Images

An EU flag and a Union flag held by a demonstrator is seen with Elizabeth Tower (Big Ben) and the Houses of Parliament as marchers taking part in an anti-Brexit, pro-European Union march enter Parliament Square in central London on March 25, 2017. DANIEL LEAL-OLIVAS/AFP/Getty Images
Listen Now

“KEEP CALM AND CARRY ON!” That was the message on a morale-boosting poster produced by the British government before the outbreak of the Second World War in 1939.

The same message – more or less – is being sent out by the current British government as Britain faces what has been described as its biggest peacetime challenge since the defeat of Hitler: Brexit.

Comparing Britain’s departure from the European Union with a world war may seem laughable.

But some of the rhetoric swirling around Brexit – and the possibility of leaving the EU without an agreement on the terms of the divorce or the future trading relationship with the bloc – has been “hair raising and extreme,” in the words of Britain’s Brexit Secretary Dominic Raab. There has been talk of food shortages, hospitals running out of drugs, aircraft being grounded and even riots in the event of a “no deal” Brexit.

Raab says this is hysterical nonsense. And he’s just embarked on an information blitz designed to calm everyone down and allay some of the more lurid fears about what will happen after the official departure date, March 29, 2019.

Raab has unveiled an initial batch of 25 “technical papers” advising companies and individuals how to prepare for a no-deal scenario. He promised the Brits that food and medical supplies would not run short … and that their favorite sandwich would not be at risk.

“Let me assure you that contrary to the wilder claims, you’ll still be able to enjoy BLT after Brexit,” he said.

Bacon from Denmark, lettuce from Spain and tomatoes from the Netherlands will continue to arrive in Britain, Raab said, along with the rest of the 30 percent of the nation’s food that comes from continental Europe. A no deal Brexit would not be a national emergency, he asserted.

“There are no plans to deploy the Army to maintain food supplies,” Raab insisted.

In an interview with the BBC, Raab said Brexit, with or without a deal would be good for Britain “over the long term.” He admitted however, leaving the EU without a deal, after more than 45 years of membership, could be risky in the short term.

The risks do seem rather daunting. Unless Britain and the EU work out a new trade relationship, customs checks would be reintroduced and that could be bad news for food imports and exports.

“Fresh produce is going to be massively impacted if there are any delays at the ports. Products will arrive less than fresh on the shelves,” said Ian Wright, a food industry spokesman. “The whole question of a no-deal exit is a very grisly prospect,” he said.

Many British manufacturers of goods other than food could be affected. Raw materials and components, as well as finished products, criss-cross the border. Rod McKenzie of the main trucking industry trade group, the Road Haulage Association, said that traffic would be vulnerable.

“If there is no transition deal, there will be very, very severe disruption to supply chains,” McKenzie said.

Intangible trade could also be at risk. Insurance contracts and even pensions taken out with British companies by people or businesses in continental Europe could be rendered invalid if there’s no deal. Jonathan de Beer of the Association of British Insurers said millions of people could be impacted.

“The Bank of England estimates there’s around 38 million insurance contracts, around 55 billion pounds worth, which is a lot of customers who are left in legal limbo,” he said.

Brexit supporters protest that all this is designed to scare the Brits into agreeing on an exit deal loaded in the EU’s favor or even abandoning Brexit altogether. They argue that no-deal wouldn’t be a disaster. Since the EU has an $80 billion trade surplus with Britain, the bloc would do everything in its power to ensure that its own exporters do not lose out. So, food and other supplies from continental Europe would continue as normal.

And if the U.K. does leave without a deal next March, the country would be free to slash duties on all its imports and reap enormous benefits.

“We would be able to cut the costs of our imports on goods across the board by a very considerable level. You’re looking at savings in the many billions of pounds a year for British consumers,” argued Martin Howe, a pro-Brexit lawyer.

The British government does not share his enthusiasm for a no-deal Brexit. It’s bending over backwards to secure an agreement. And, after the latest round of talks in Brussels (and despite his KEEP CALM AND CARRY ON campaign) the Brexit Secretary said he’s optimistic that a deal is within reach.