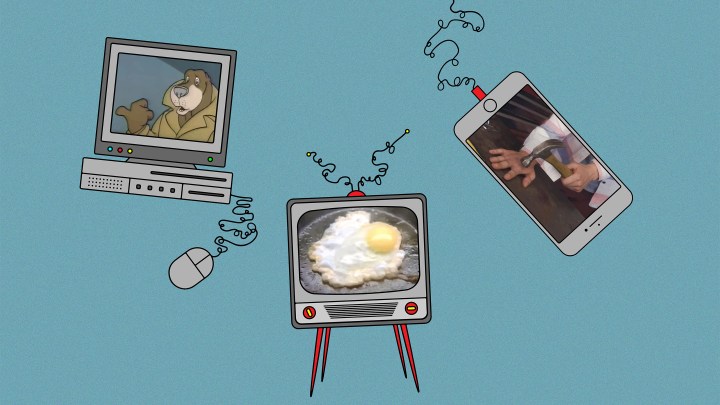 For decades, we’ve been trying to convince teens that drugs are dangerous, definitely not fun and totally deadly.

Beginning in the 1980s, adults — namely a combination government, non-profits and ad companies — weaponized something they knew teens already loved: TV. The simple idea was to use TV advertising to cement messages in teens’ minds that would discourage drug use, encourage them to stay substance-free and draw a line in the sand between users and non-users.

Although the U.S. government has spent more than a billion dollars on funding anti-drug public service announcements since the 1980s, there’s little evidence to show that anti-drug PSAs pay off. But that’s not stopping governments and non-profits from again reaching to the anti-drug PSA handbook, even if the reasons we remember anti-drug PSAs are the exact reasons their makers didn’t intend.

Starting with Nancy Reagan’s “Just Say No” campaign, TV viewers in the 80s were blitzed with anti-drug PSAs. They were everywhere, buffeted by government funding and airtime donated by television stations and networks.

In 1987, the then-Partnership for a Drug-Free America created the famous “This Is Your Brain on Drugs” ad, starring an egg in a cast-iron pan.

“That became sort of iconic but I know that it’s also been widely parodied,” said Michael Ludwig, professor of health education at Hofstra University.

And it wasn’t the only ad of that era that’s almost laughable today. There was McGruff the Crime Dog with a chorus of children singing that drug “users are losers.” There were the Teenage Mutant Ninja Turtles calling drug dealers “dorks.” And Pee Wee Herman creepily advising children to stay away from crack cocaine.

There’s no good evidence to show these ads worked. Studies showed that ads, even if they soured teens’ attitude on drugs, didn’t actually cause them to change their behaviors. In fact, some ads had a forbidden fruit effect — they made teens even more curious about drugs.

“When you advertise against it, you may also be inadvertently advertising for it,” Ludwig said.

But PSAs can also broadcast cultural messages about the type of people who use and sell drugs. Messages that stick with people.

“I saw there was one where there was a young black male who was suggesting, ‘Hey, kids, get your mom and dad out of the room,'” Ludwig said. “And as he talked about the various drugs that he had for sale, he morphs from a young black man into, literally, a snake.”

“I’m getting a message of fear, but what I’m seeing is an image of blackness,” McIlwain said. “In subtle ways [that] gives us a license to treat people like animals. And that’s precisely what you saw throughout the crack war, looking at African-Americans primarily as its target.”

By the late 1980s, public service announcements peaked at a rate of some $1 million in airtime a day.

“Money spent in the 80s on those ads was a waste,” said Keith Humphreys, a professor at Stanford University and former drug policy adviser to presidents Bush and Obama. He says those ads were basically lectures with a singular message.

“You shouldn’t use drugs because authority figures have told you not to,” Humphreys said. “Now, be a good boy or a good girl and do what you’re told. No adolescent wants to hear that.”

By the 1990s and 2000s, anti-drug messaging got scarier and more graphic. The message baked into these ads seemed to say “if you abuse drugs, here are the dire consequences that await.”

The “brain on drugs” egg ad got a violent, destructive update. And even private citizens, like a business man in Montana, began to fund scary ads to show the dark side of meth addiction. In those, teens perform over-the-top violent acts, like hitting their mom, in contrast to laid-back voice-overs which talk about how meth isn’t really that bad.

That shock-em-away playbook has remained. The Trump White House recently partnered with non-profits to create graphic anti-opioid PSAs that will live online. And Arizona is in the midst of a new $400,000 anti-opioid social media campaign. It includes two horror-movie themed ads, featuring teens trapped inside a pill.

But do scare tactics in PSAs work? The simple answer is: no.

In 2016, the federal government evaluated different research into anti-alcohol, tobacco and drug messaging. They found that “though used widely since, studies prove scare tactics ineffective in substance abuse prevention.” Going full-blown scary might work on teens already unlikely to use. But it can lead others to tune out.

Some tactics, however, have been found to be effective. A study from Ohio State University found teens were slightly less likely to try pot when ads showed drug-free teens as independent and thinking for themselves.

Today, there’s a reason we don’t see too many government-funded national anti-drug campaigns. The media budget for the government office funding those ads was axed in 2012, after years of criticism that its ads were ineffective. This has left non-profits and states to take up the PSA helm, and some of them are reaching for a different playbook.

“The other thing you can do is to just give people factual bits of information that are helpful to them,” Humphreys said. Like what to do if you’re struggling with addiction or tips on preventing overdoses. Because teens are teens — and once you start telling them what to do? That’s when they start tuning out.

This story is part of our podcast The Uncertain Hour, where we dive in to one controversial topic each season to bust long-standing myths and find the origin stories of the world we live in. This season starts in 1989, when George H.W. Bush held up an actual baggie of crack in his first televised speech in the Oval Office — a baggie he claimed was seized in front of the White House. We find out the surprising backstory of that crack, and how the policies Bush launched continue to reverberate today, even as the crack epidemic has faded into history. Subscribe here or wherever you get your podcasts.