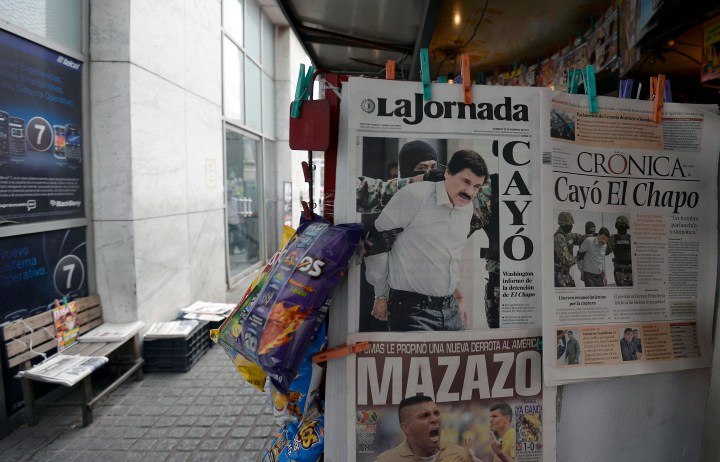 Mexican drug lord Joaquín “El Chapo” Guzmán will be sentenced on July 17. The federal prosecutors who convicted him have asked that Guzmán spend the rest of his life in prison.

Prosecutors said it represents the total amount of cocaine, marijuana and heroin Guzmán trafficked into the U.S., multiplied by the average street price of those drugs.

“That is, of course, questionable, in terms of the actual profit,” said Vanda Felbab-Brown, a senior fellow at the Brookings Institution who studies drug cartels and organized crime.

“Drug trafficking groups have very substantial outlays. They need to pay corruption fees that can be enormous, they need to keep paying their foot soldiers. So, just like for any business, profits are just a portion of what the revenues are.”

But even if that number is accurate or close, Bruce Bagley, professor at the University of Miami, says there’s another issue for the U.S. government.

“The problem is, of course, that they have not found one single cent of the money that he supposedly has, because he has hidden it all,” he said.

It turns out drug lords are pretty good at laundering money.

Elliot Williams, a former federal prosecutor who is now a principal at the lobbying and consulting firm the Raben Group, thinks it’s very unlikely the U.S. government is going to be able to seize cash from Guzmán — much less $12 billion of it.

“But what prosecutors can do is seize what are called ‘substitute assets,'” William said. “That would be property that they know he has that were paid for with the proceeds of crime.”

Williams says the Drug Enforcement Administration needs something to show for its years-long pursuit of Guzmán . But Felbab-Brown at Brookings says seizing assets has a limited impact.

“Never yet have they managed to significantly hamper, let alone disable, the entire illicit economy, the entire organized crime enterprise.”

According to the DEA, the Sinaloa drug cartel remains the biggest producer of drugs on U.S. streets and other Mexican drug rings have been rising since the kingpin’s capture in 2014.