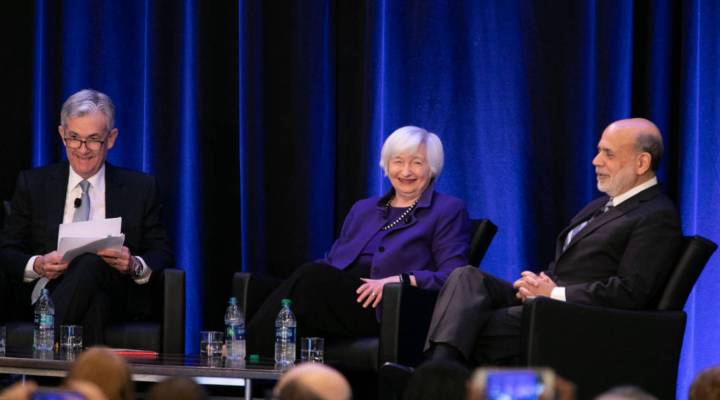 It’s okay, CBS. We have you covered.

On Sunday, the news program “60 Minutes” is airing a rare interview with Federal Reserve Chairman Jerome Powell, which will include special appearances from his predecessors Janet Yellen and Ben Bernanke.

All three have also been recent guests on Marketplace, where they’ve discussed a wide range of topics — from President Donald Trump to their biggest regrets to why they agree to broadcast interviews.

Here are some questions from Kai Ryssdal that they’ve already answered.

1) “Do you think the president has a grasp of macroeconomic policy?”

Our wide-ranging interview with the former Fed chair touched on the current state of the economy, the Fed’s role in the financial crisis and much more. But Yellen’s comments about the president’s grasp of macroeconomic policy made headlines.

“Well, I doubt that he would even be able to say that the Fed’s goals are maximum employment and price stability, which is the goals that Congress have assigned to the Fed,” Yellen said. “He’s made comments about the Fed having an exchange rate objective in order to support his trade plans, or possibly targeting the U.S. balance of trade. And, you know, I think comments like that shows a lack of understanding of the impact of the Fed on the economy, and appropriate policy goals.”

2) Do you understand why people were upset during the financial crisis?

The Fed intervened in the 2007-08 crisis through “its discount window,” an emergency loan program that allowed banks to borrow millions of dollars.

Yellen said she “absolutely” understands how people felt, even though she explained that there were very important reasons why the Fed acted the way it did.

During her interview with Ryssdal, Yellen said it was so the flow of credit to businesses and households wouldn’t dry up, which could have caused Great Depression-era levels of unemployment.

The crisis collectively destroyed over $30 trillion of the world’s wealth, with only one top banker ending up in jail.

“People were really mad at what financial institutions, and what happened in Wall Street, and they’re right to be mad. I’m mad, too,” Yellen said. “And it was very distasteful to have to do some of the things that prevented failures on Wall Street. I think Chair Bernanke has said that rescuing AIG was one of the most distasteful things that he ever had to do.”

3) What are your regrets about the financial crisis?

For Ben Bernanke, who as Fed chair from 2006 to 2014 oversaw the immediate response to the financial crisis, it was not effectively communicating the purpose of the bailout to Americans and how a banking-system collapse could affect their everyday lives.

Ryssdal posed this question to Bernanke, who’s often been criticized for his role in the bailout.

“I made efforts, I went on television, I went on ‘60 Minutes’ and various things to try to explain why we were doing what we were doing and how I, as an academic, had no particular connection to Wall Street, for example. But obviously, we didn’t, you know, we didn’t make that case. And it was difficult.”

4) Why should a Fed chair bother with interviews?

Current Fed Chair Jerome Powell wants people to actually understand why the Fed does what it does.

Fed chairs have notoriously shied away from doing interviews, but Powell is making an effort to demystify what goes on at the central bank. In Powell’s first broadcast interview, Marketplace host Kai Ryssdal asked him, point blank, why he agreed to talk.

His response: “Part of it just is that I feel that we have an obligation to explain ourselves as clearly as possible, the things that we do affect everyone. And you know, there’s a professional audience that follows us very carefully, every comma, every word change,” Powell said. “I think we’re shifting our focus a little bit to you know, address (sorta) the American people more generally and try to explain what we do, why we’re doing it, and how we carry out the important jobs that Congress has given us.”

This isn’t a one-off message, by the way. The Fed’s policy statements have been complicated, but under Powell’s leadership, a Reuters analysis found statements and opening remarks at Fed news conferences have become easier to follow.

5) Can we get a sneak peek of the Consumer Price Index numbers for February?

The 60 Minutes interview will air on Sunday, March 10. But even if they asked for this data one second before Tuesday, March 12, 8:30 a.m. EST — which is when the data is set to be released — Powell would not answer.

The CPI tracks the average price change over time or a basket of good and services. If it goes up, that’s an indicator that inflation is also rising.

Ryssdal’s interview with Powell occurred in the early morning of July 12 — six minutes before the scheduled release of the CPI numbers for June.

Ryssdal: Let me ask you then about inflation and about prices which are as you say starting to tick up to where the Federal Reserve wants it to be. I’ll note here that we’re talking at 8:24 in the morning on the day that consumer prices come out. They come out in six minutes. With the caveat that this is going to air now in five, six hours from now, whatever it is, you have the number in your back pocket, you know what the number is. Inflation CPI?

Powell: Well, let’s just say that I do get a look in advance at these things. Yes.

Ryssdal: Score one for the chairman’s adherence to the rules.

Powell: Not going to say anything that would suggest what it might be.