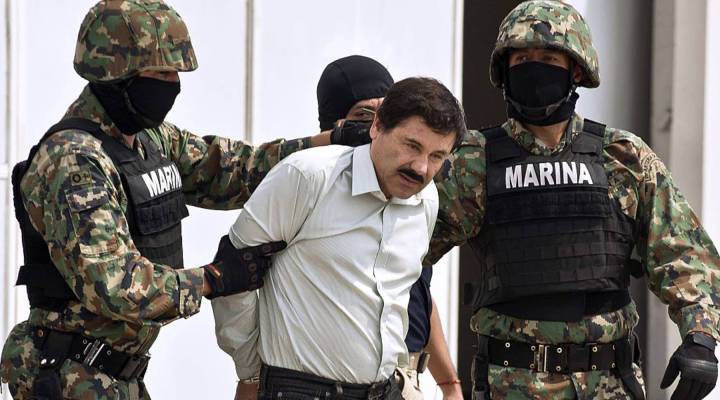 Drug kingpin, Joaquín “El Chapo” Guzmán Loera faces life imprisonment, after he was convicted Tuesday of running an industrial-scale drug smuggling business as head of the notorious Sinaloa cartel — one of the oldest and more established drug trafficking organizations in Mexico. The charges include 26 drug-related violations and one murder conspiracy, according to the U.S. Department of Justice. Guzmán will be sentenced on June 25.

The Sinaloa cartel is considered one of the most dominant drug trafficking organizations in Mexico and is recognized by the U.S. Intelligence Community to have a larger international footprint than any other Mexican transnational criminal organization.

With Guzmán at the helm, the cartel was profitable. According to the U.S. Department of Justice, his “business generated billions of dollars in illicit proceeds.” Now that the three-month long trial is over and he’s behind bars, what will this mean for the business of the Sinaloa cartel?

For more on this, we talked with journalist Sam Quinones, the author of “Dreamland: The True Tale of America’s Opiate Epidemic.” Quinones lived in Mexico from 1994 to 2004 and continues to write about the impact of drugs and drug-trafficking into the U.S. Here’s an edited transcript of the conversation.

What are some of your takeaways from the trial?

What amazed me — and I say gratified me — was all the amazing details that came out in this trial. The twins — the Flores twins — their testimony about how deeply involved they were in Chicago or Chicago being kind of, El Chapo’s center of operations in the United States. Also an astounding claim that he [Guzmán] bribed the president of Mexico. I’m not sure anything radically new came out of it except for a further idea of how powerful and how sophisticated drug trafficking has become in Mexico, particularly by guys who, when I was in Mexico, were really known as, hillbillies, not terribly sophisticated. All of this means that what we’re dealing with is now a far more advanced, sophisticated organization that has grown far beyond what it once was … and despite the lack of education that Chapo Guzmán has, only a third grade education, he nevertheless has become a master marketer, and also a very sophisticated logistician getting stuff from one place to another in the global economy.

You’ve said that the Mexican cartel groups have fragmented significantly since you lived in Mexico from 1994 to 2004. Has that fragmentation helped these groups become more sophisticated?

I would just say that there seems to me now to be an inability in Mexico to control them. And because of that, there has been these wars that have led to fragmentation to new actors. So all this goes to show how desperately Mexico needs to reinforce its governmental structures and its law enforcement and criminal justice structures from the very bottom all the way to the top.  Mexico thought for a long time that ‘we don’t need to really bother with these guys because all they’re doing is selling dope to the gringo. Our guys are providing jobs.’ It was almost a romantic view of who these guys were. These swashbuckling traffickers providing jobs and basketball courts in their little villages and selling dope to this insatiable gringo out there. And so we don’t really need to attack them and we can go along. In fact a lot of times the levels of government got very wealthy on these guys. And all of that has been proven now certainly in the last 10, 12, 13 years to be total mythology. You can not stand by and watch as people openly flout the law because eventually, no matter how immune you think you are from their response or from their effect, they will turn on you and that’s what happened in Mexico. And now of course they are also poly-drug provider business people. They provide marijuana for sure which they always did and heroin to some degree, but they also provide fentanyl, they also provide cocaine from Colombia. They also provide high quality methamphetamine that they know how to make themselves. They have morphed into this very, very serious security threat all from the idea, I think, that we don’t really have to deal with these guys because they’re keeping their violence among themselves and they’re selling dope to Americans. We’re not going to be effective.

Do you think it makes a difference in these drug-trafficking organizations to go after leaders like El Chapo? Does it affect the organization’s business?

I do. I think that going after these these head guys is a necessary thing. There are nasty consequences that go along with it, like a lack of control. But you can not just simply let guys flout the law, become billionaires, become ranked by Forbes and all this stuff. You have to go get them. And the benefit that you get from going after guys like Chapo Guzmán and other top capos [the captain of a cartel or mafia] is because they frequently possess a set of skills that has allowed them to achieve what they have achieved. One of those skills is they are extraordinarily bloodthirsty. But that’s not the only one. There are remarkable skills at alliance building, at transit, at political corruption … there’s a whole bunch of skills that allow certain guys to rise and other guys to be killed off or what have you. And I think you see various examples over the last 15, 20 years where really it has led to the demise of a whole cartel when you arrest one guy. The classic example is when they arrested Ismael Higuera who was the guy who ran — he was really a lieutenant, but one of the great logisticians of his time — the Tijuana Cartel for the Arellano-Félix brothers. They were really not in Tijuana very much. They were not dealing with the day to day routine of transit, sending drugs across one of the most heavily guarded borders in the country. That was tasked, to Ismael Higuera, and he was very good at his job. One thing that made him good was he was extraordinarily bloodthirsty. But he was also good at making sure that everybody got paid off. He had the skills and those skills are not as common as you might think. There have been other examples of guys who just know how to kill people and nothing else and they end up being killed themselves, going to prison. And when they arrested Ismael Higuera and his brother Gilberto who ran Mexicali, the Arellano- Félix cartel began to fall apart, and they are a shadow of their former selves. Doesn’t mean, of course, that drug trafficking has stopped. Drug trafficking is always morphing and changing. But you cannot just stand by and say well that means we shouldn’t do anything. I think Chapo Guzmán needed to be taken down. It’s an effective tool. It says there is a law, there is law in place and we are going to enforce it. The rule of law matters, and it’s something that Mexico desperately needs to enforce.

Do you think Ismael “El Mayo” Zambada Garcia is well-equipped to handle the Sinaloa Cartel without El Chapo?

I think El Mayo Zambada has shown himself to be very astute. Almost far more astute than Chapo because Zambada possesses a lot of the same skills that El Chapo has, except he is far more discreet. You never hear about him in the news. He is never out there giving interviews. So … I think that is probably what sets him a little apart from Chapo Guzmán — more of a business man and less of a flashy cowboy.

Can the Sinaloa Cartel continue to be successful without El Chapo?

Well I do think the Sinaloa Cartel will continue. There’s a deep culture in Sinaloa that is very astute, very talented at making drugs now, making fentanyl, making methamphetamine. I don’t see any other alternative to going after these guys unless of course you simply want to legalize all drugs. That’s an option. But as long as you’re going to have drugs illegal, you have to go after these top guys and eventually I think what will happen is what happened with the Italian mob. The talent pool just bled out. It just died. You no longer had the really good visionary business people in charge. You began to have people who were just kind of not terribly smart. And that may also happen … we’ll see. But it’s all fascinating to me and it’s all been eye-opening to see the stuff that’s come out of that trial.

You say that you think going after the leaders of cartels is important, but it sounds like some disagree with you on this strategy. Would you say it’s a contentious issue?

I don’t say that it’s the best route. I say that you cannot not do it. There are other things that should be done, like investing in local infrastructure of all kinds: courtrooms, parks, storm drains, libraries, you can go on and on. I don’t think you can avoid going after capos. There are many issues that might fall under the heading of ‘how to attack the drug problem in Mexico’ and then of course there’s many issues up here [in the U.S.] like what we do about the guns, the river of guns that have flown south from our country to Mexico over the last 50 years. That kind of thing. The demand for drugs in this country is huge. But I just think that there’s no way to avoid going after these top guys because they are charismatic. They are romantic. People do write songs about them. They are people that folks in certain areas look up to and they have to be taken down to show that this cannot stand.