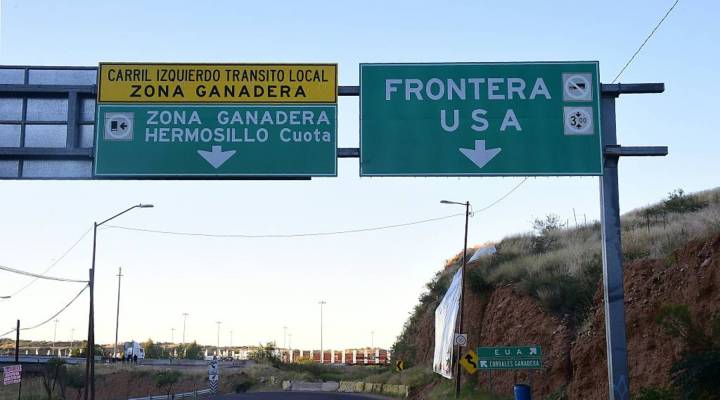 COPY
The turnoff road for the United States outside the canteen run by BorderLinks just across the US-Mexico border in Nogales, Sonora, Mexico on October 11, 2016. FREDERIC J. BROWN/AFP/Getty Images

The turnoff road for the United States outside the canteen run by BorderLinks just across the US-Mexico border in Nogales, Sonora, Mexico on October 11, 2016. FREDERIC J. BROWN/AFP/Getty Images
Listen Now

President Donald Trump used the word “immigration” just once in his inauguration speech, although he did promised to secure the border between the U.S. and Mexico. Just across from Nogales, Arizona, the Mexican city of the same name showed little interest in the new U.S. president on Friday. We peeked into several coffee shops, bars and restaurants, and not one television was turned to the festivities in Washington. Some residents watched a baseball game. Others, a meeting of cattle herders.

That doesn’t mean the new administration’s policy won’t have an effect on Mexico. Cuts to staff at ports of entry could mean long lines to cross the border, and that can have a big impact on retail operations in Arizona.

“We’re physically in the United States, but we’re economically in Mexico. So my business, you know — where 95 percent of my customers come from Northern Mexico — the 5 percent of customers that come from this side of the border, they’re in this area because they’re doing business with Mexico,” said Bruce Bracker, a Nogales, Arizona store owner.

Back in Nogales, Mexico, residents are facing economic strain from a depreciated peso and sharp spikes in gas prices. Bumper stickers and protests decrying the cost of gas are all over the region. And like many communities in the U.S., there are more persistent problems like stagnant wages and lack of opportunity.

We did find one group of businessmen deeply concerned about President Trump’s approach to the border: members of the Sinaloa Cartel. Beyond Trump’s proposed border wall, they’re worried about new enforcement technology — from drones to heat-seeking devices — that could disrupt established drug-smuggling and human trafficking routes.