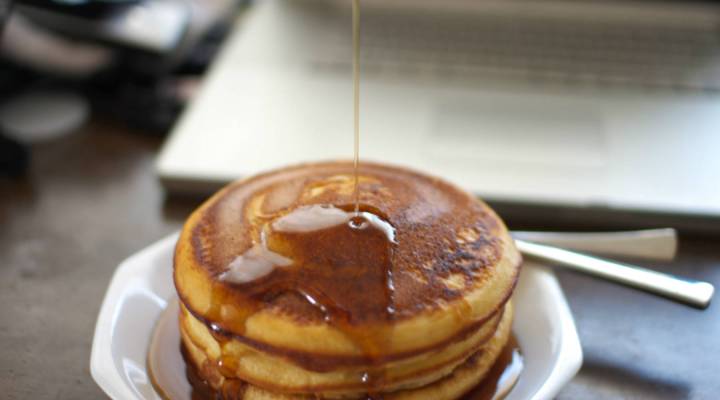 COPY
Who knew there'd be so much controversy over a classic pancake topping? Taidoh/Flickr

Who knew there'd be so much controversy over a classic pancake topping? Taidoh/Flickr
Listen Now

The world’s most famous cartel is probably the Organization of the Petroleum Exporting Countries. But there’s another influential cartel that holds sway over a common breakfast item: The Federation of Quebec Maple Syrup Producers.

FPAC, which controls nearly three-quarters of the world’s sweet pancake joy juice, has been powerful for a while now — but things are starting to change.

There are a lot of parallels between the oil and maple syrup cartels, including controversy over production quotas, the existence of strategic reserves, black market dealings, and growing competition from the U.S.

Reporter Jen Skerritt, who recently tackled those issues in an article for Bloomberg, joined us to talk about the controversy over this breakfast staple.

On why there’s a black market for maple syrup:

There’s a lot of frustration with producers in Quebec, and part of that is looking at their counterparts in states like Vermont, where there’s no limits on how much syrup they can produce. In Quebec, it’s very different. They have a quota system, so the Federation kind of determines how much someone is able to produce. Given kind of the backdrop of all of this, some producers have decided to just do exactly that: sell it on the side for extra cash. And there’s people that just don’t agree, and say it should be an open market system. And even the government earlier this year came out with a report saying the current system is causing people to sell on the black market.