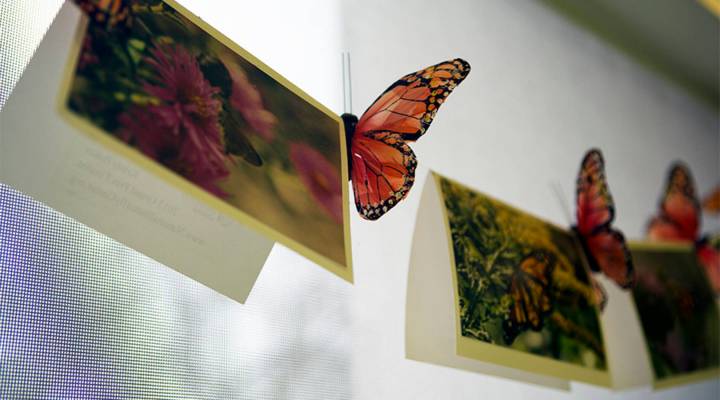 The three southern-most counties of Texas are home to more than 300 butterfly species. The National Butterfly Center in Mission, TX is holding out hope that a border wall won't be built on its property. Filipa Rodrigues/Marketplace
Business on the Texas-Mexico border

The three southern-most counties of Texas are home to more than 300 butterfly species. The National Butterfly Center in Mission, TX is holding out hope that a border wall won't be built on its property. Filipa Rodrigues/Marketplace

Editor’s note: Marketplace’s Andy Uhler is just back from a week of reporting about doing business on the Texas-Mexico border, during a time of intense debate over U.S. immigration policy and a push by President Donald Trump to build a border wall. Uhler is sharing some small stories along the way. Below is the fifth entry from his reporter’s notebook. You can read the other entries here.

The Trump administration’s border wall remains the major fight on Capitol Hill. But funding for some new barriers along the Rio Grande River in South Texas has already been allocated, passed with bipartisan support last year. And in some places where new wall is planned and land is already being prepared for construction, you can find heavy local opposition.

The National Butterfly Center in Mission, Texas, just a few miles from the Rio Grande, posted a photo Monday showing an excavator parked next to its property. The center is a privately- owned, 100-acre ecological preserve. When the Trump administration began designing plans for a new set of barriers that would render 70 acres of the center impassable for the staff and guests, the center hired lawyers to challenge those plans. Because the center is on private land, the federal government would have to either gain consent from the owners, which is unlikely, or exercise eminent domain to get access to build a wall.

More than two-thirds of the National Butterfly Center in Mission, Texas would be cut off from visitors if the federal government’s border all were to be built as planned. Heavy equipment like bulldozers and cranes have already been spotted parked on land adjacent to the center.

The Rio Grande Valley in South Texas is a top nature tourism destination in the United States and the ecotourism industry contributes lots of money to the local economy. The unique habitat, known as the Tamaulipan thornscrub forest, is home to hundreds of different butterfly species and more than 500 types of birds, some of which are listed as threatened or endangered.

The National Butterfly Center’s outreach coordinator, Luciano Guerra, recently took me on a tour of the grounds to show me where the feds are planning on putting the wall, what it would mean for the wildlife in the area, and how it would affect the local economy.

“Hundreds of millions of dollars come into the Rio Grande Valley every year because people want to come down here to see our birds and butterflies and other kinds of wildlife,” Guerra said. “How is (a wall) not going to hurt our economy down here?”

Guerra greets a tour group from Minnesota as we make our way around the grounds. He takes me to an unassuming tree a few paces from the parking lot.

During a tour of the National Butterfly Center on Thursday, Jan. 31 2019, the center’s outreach coordinator, Luciano Guerra, points out a butterfly chrysalis. “When they build the border wall they’re going to have to destroy habitat,” he said.

“Some people don’t realize that butterflies are particular about their host plants,” Guerra told me as he pointed to a Guamuchil tree where hundreds of Red-bordered Pixie butterflies are just weeks from hatching. “Whenever you destroy a certain plant or tree or vine, you could be destroying the only source of food that one species of butterflies’ caterpillars can eat.”

A law passed in 2005 amended previous immigration statutes and gave the Department of Homeland Security expansive rights to waive any U.S. laws that stand in the way of wall and barrier construction along the southern border in the name of national security.

“And they’re going to bulldoze whatever is in their way, whatever’s in their path,” Guerra said. He said even the loss of one plant species will have ripple effects for the wildlife in the Rio Grande Valley. And that will, in turn, hurt the local economy.