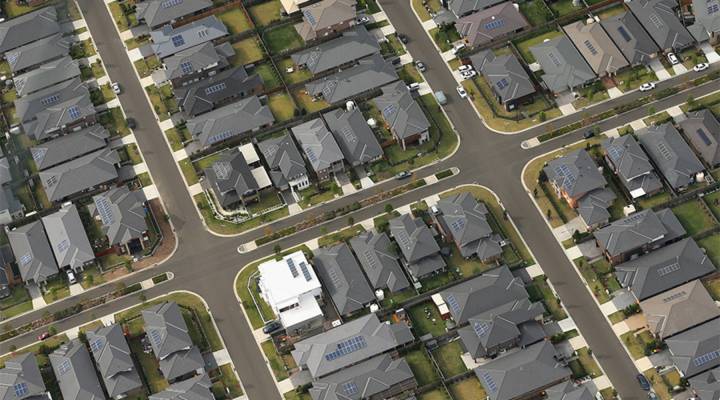 COPY
Nationally, the rate of black homeownership is less than 42 percent, compared to a rate of about 73 percent among white households. Cameron Spencer/Getty Images

Nationally, the rate of black homeownership is less than 42 percent, compared to a rate of about 73 percent among white households. Cameron Spencer/Getty Images
Listen Now

Ashley Gibson was still in the first flush of homeownership as she showed off her four-bedroom, two-bath house in suburban Houston on a recent evening.

“It’s so much space for the kids to just run around and just enjoy themselves,” she said, opening the door to an enormous backyard.

Gibson, 31, works with the state health and human services commission and lives with her two kids, ages 2 and 12, and her grandma. She bought the house last July for $183,000. On the day they moved in, she recalled sitting in the living room, watching her son play outside and feeling like they’d finally made it.

“I get that feeling to this day,” she said. “It’s just such a good feeling to know that this is my home.”

For African-Americans like Gibson, that feeling has become all too rare in the decade since the financial crisis. After peaking at close to 50 percent in 2004, the rate of black homeownership — that is, the percentage of households that are owner-occupied — is now less than 42 percent nationally. That’s about where it was just over 50 years ago when housing discrimination was legal. Among white households, the homeownership rate is about 73 percent.

APM Research Lab examined America’s 128 cities with populations of 150,000 or more that also had a minimum of 5,000 black households. In 79 cities and the U.S. as a whole, black homeownership eroded.

When Gibson started looking for a house about two years ago, saving everything she could for a down payment, she knew she wanted to work with an African-American realtor.

“It was very important,” she said. “I felt like she would understand my needs and my wants.” A co-worker gave her the business card for Sherrie Jackson, broker-owner of Umbrella Realty.

Jackson is a member of the National Association of Real Estate Brokers, a black trade group that aims to produce 2 million new black homeowners across the country in the next five years. In Houston, black homeownership is about 32 percent, still far lower than before the housing crisis. As in many cities, African Americans here were more likely to lose their homes to foreclosure during the crisis, Jackson said, and they’ve had a harder time getting credit since. They’ve also had to deal with Hurricane Harvey, which increased demand for houses and helped push up prices.

Jackson starts all her clients with Buyers 101. First, she and Gibson drew up a budget to see how much house she could afford. Then Jackson showed Gibson how to improve her credit score by paying down debts and spending less.

“It was an educational session each and every time,” Gibson said, laughing. “She’ll get to talking real fast in her realtor lingo, and I’m like, ‘What? What does that even mean?’”

Gibson’s score gradually rose from the low 600s to nearly 700, she said. She found a house she liked in Missouri City, a Houston suburb with a large black middle class.

“It was just something about the house,” she recalled. “It was everything that we needed.” Jackson connected Gibson with a lender and guided her through the paperwork. That’s one more homeowner toward that 2 million goal.

For its part, the Houston Black Real Estate Association, the local chapter of the national group, has asked its members to help at least nine black families buy homes each year.

“I have to have a minimum of three to four closings a month, so I’ve reached that goal in two months” said LaTisha Grant, one of the group’s leaders and owner of TAS Realty Group.

It’s not just about selling, Grant said. The association is also trying to build a pipeline of future homeowners, by leading financial literacy workshops in schools and working with black churches. It’s a mission that goes back to 1947, when a group of black real estate professionals started their own trade group, calling themselves “realtists.”

“The reason that ‘realtist’ exists is because 70 years ago we were not able to join the realtors,” said Grant, referring to the National Association of Realtors, the industry’s main trade group.

That’s changed, but a lot hasn’t. Belinda Everett heads the housing committee at the NAACP’s Houston branch, where she leads classes for first-time buyers.

“Just yesterday I got a call about somebody trying to buy a house in Beaumont, and the broker told the agent, ‘There’s no way you’re going to make a commission on that because we’re not going to let black people buy in that neighborhood,’” she said in an interview in January.

That kind of racism is one reason for the persistent wealth gap. According to the Federal Reserve, the median net worth of white families is nearly 10 times that of black families. Like it or not, said Jackson, homeownership is still the primary way most Americans build wealth.

“That’s what I believe the black community is lacking, is wealth,” she said. “Generational wealth. Leaving a legacy for our kids and our kids’ kids.” Her client, Ashley Gibson, has taken the first step, and she’s already thinking about building that legacy.

“This is my first home,” she said. “But I would definitely love to get another home in the future and rent the home that I have out.”

Correction (Jan. 31, 2019): A previous version of this story misstated the number of bedrooms in Ashley Gibson’s house. The text has been corrected.