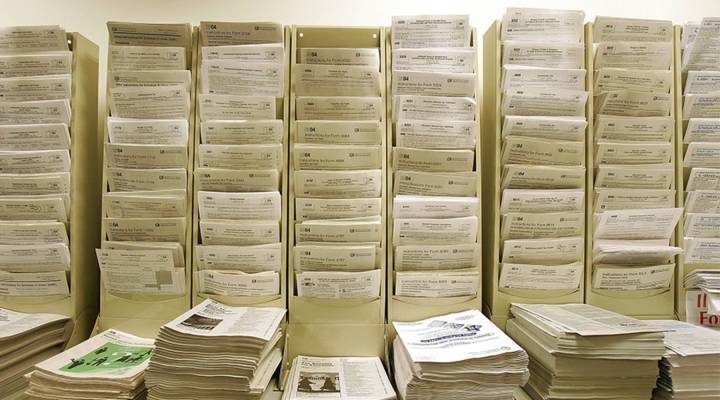 COPY
Under the new tax law, LLCs and S corporations pay taxes based on their owner’s personal income instead of the corporate tax rate. Tim Boyle/Getty Images

Under the new tax law, LLCs and S corporations pay taxes based on their owner’s personal income instead of the corporate tax rate. Tim Boyle/Getty Images
Listen Now

Smithfield Manor, a nursing home in North Carolina, has a problem.

It’s getting harder and harder to hold on to employees, specifically, nursing assistants. They’re in high demand right now. And they have a tough job.

“Dealing with the dying process and the aging process can take its toll on you,” said Carol Arnn, the owner.

Arnn wants to start a retention program for nursing assistants and hand out bonuses. But she needs a way to pay for it.

She heard that under the new tax law, she might be eligible for a big tax break. Her accountant, Jeremy Bass, said it could save about 7 cents on the dollar. The problem is they don’t know whether her business qualifies.

The new tax law cut taxes for corporations from 35 percent to 21 percent. But that didn’t apply to certain kinds of businesses, like LLCs and S corporations. They’re called pass-throughs, and they pay taxes based on their owner’s personal income, not the corporate tax rate.

So Congress came up with a tax break for them, too. They can deduct up to 20 percent of their income when they do their taxes.

But that wasn’t the end of it, because some tax experts said this new deduction could easily be abused.

Nicole Kaeding, director of federal projects at the Tax Foundation, gives a hypothetical.

“I work as a tax economist at a tax think tank in Washington, D.C.,” she said. “I have an incentive, because of this provision, to walk into my boss’s office and to say, “I’m sorry but I no longer can work here at the Tax Foundation.”

Then she could form a new LLC that would do the same work for the Tax Foundation and call itself a business to get the deduction.

Last summer, the IRS came up with some rules to keep people from gaming the system. They are more than 180 pages long, and they’re filled with caveats, like a list of businesses and industries that don’t qualify for the tax break.

The IRS tried to draw clear lines between who gets the deduction and who doesn’t. But there are still a lot of questions.

For instance, is a nursing home, like Smithfield Manor, considered a health business? It does have nurses on staff.

“But they’re also providing room and board, dietary services, activities,” Bass said. “So there’s sort of a gray area there.”

The government is still finalizing its guidelines on this deduction. But it’s not clear when those are coming, especially with the partial government shutdown, now in its 24th day.

In the meantime, accountants have decisions to make.

Andrea Parness, a certified public accountant in New York, said this deduction has been tripping up accountants since the law passed. She organized some training sessions for her peers.

Parness said she’s doing the best she can for her clients.

One of them is Cynthia King Dance Studio in Brooklyn, where children and young adults learn ballet and hip-hop.

Remember that list of businesses that don’t qualify for the deduction? Performing arts companies are on there. But Parness said this studio’s performers aren’t paid professionals.

“Of course, we all know that our children are amazingly gifted, and many of them are going to be prima ballerinas,” Parness said.

For now, they’re kids, practicing for a recital. So Parness said she is going to take the tax break for the studio. A different kind of dance company would be another story.

As for Smithfield Manor, it’s still waiting for the final rules from the IRS. The nursing home’s 2018 tax bill was due Dec. 15, so it filed for an extension.