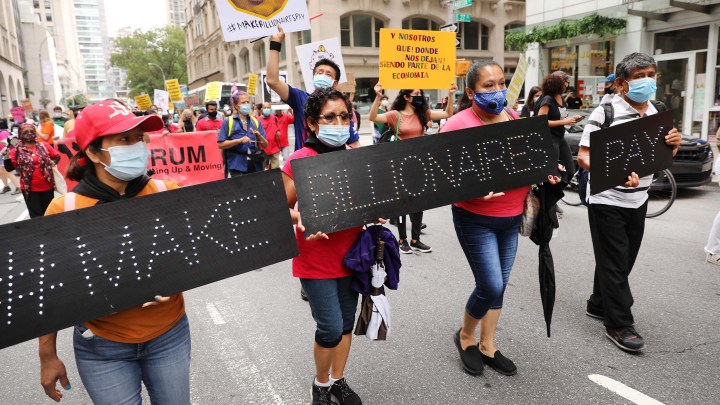 COPY
A big part of the issue, the report found, is that the IRS uses random audits to weed out cheaters. Spencer Platt/Getty Images

A big part of the issue, the report found, is that the IRS uses random audits to weed out cheaters. Spencer Platt/Getty Images
Listen Now

Americans whose incomes put them in the top 1% don’t pay taxes on a fifth of what they earn, according to new research from the Internal Revenue Service and several university economists. Those findings indicate that the tax gap between what the IRS is owed and what it actually receives is bigger than anyone thought.

“Those are important, and growing sources of income at the top of the income distribution,” said Daniel Reck, a professor at the London School of Economics and one of the report’s authors.

He said wealthy people often park their money in offshore accounts, too. Those kinds of arrangements can be really complex, “and sometimes the complexity inherent in these structures can open up a lot of opportunities for evasion,” Reck said.

A big part of the issue, the report found, is that the IRS uses random audits to weed out cheaters. Richard Prisinzano at the University of Pennsylvania’s Wharton School of Business, whose work was cited in the study, said that’s no big deal when we’re talking about lower-income taxpayers. But for people who make a lot of money and file complicated tax returns?

“An audit, even if it’s random, it takes a lot more resources than, say, someone making $25,000 a year who’s just taking the earned income tax credit,” Prisinzano said.

Then there are those offshore accounts. Law professor Adam Rosenzweig at Washington University in St. Louis, who was not involved with the study, said the IRS has to rely on cooperation from other countries.

“The more the U.S. expands its investigative powers, the more information it finds, but the more other countries might resist,” Rosenzweig said.

All of this means that the government is leaving about $175 billion a year on the table. That’s how much the report estimates the IRS could collect from the top 1% of earners.

Leandra Lederman, a professor of tax law at the Indiana University Maurer School of Law, who also was not involved with the study, said this really comes down to giving the IRS the resources it needs.

“You know, if you enforce the tax system we have, that reduces the need to enact new taxes or raise tax rates,” she said.

Lederman said that better enforcement would also help level the playing field with ordinary filers, who get W-2s and 1099s and couldn’t avoid paying taxes if they wanted to.

“It’s important for taxpayers to have a sense that the government’s enforcing the tax laws,” she said, “that I’m not going to be a chump by fully complying and paying all of my taxes.”