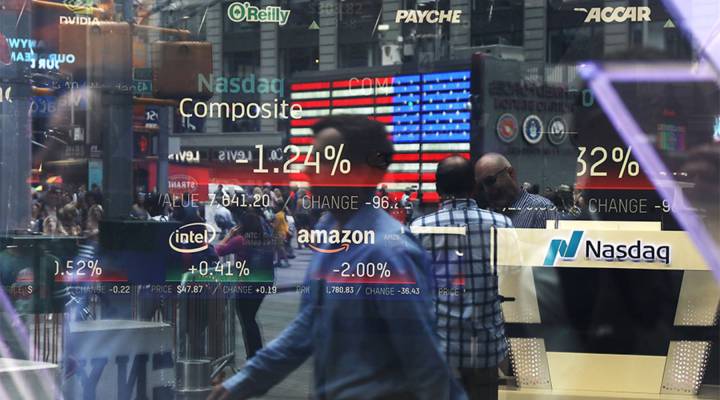 People are reflected in the window of the Nasdaq MarketSite in Times Square in New York City. Spencer Platt/Getty Images
Listen Now

Part of the Trump administration’s hard line against China is focused on intellectual property concerns. One fear is that widespread investment of Chinese money into startups gives the Chinese too much access to cutting-edge American tech innovations. That’s why legislation was passed to limit foreign investment. The Committee on Foreign Investment in the United States, or CFIUS, is now able to probe foreign investments in startups. And that is making investors, especially Chinese, balk. Deals are being abandoned. Silicon Valley watchers say Chinese money has pretty much stopped coming into the Valley. Marketplace’s Jed Kim talks about this exodus with Heather Somerville, a tech reporter for Reuters who covers startups and venture capital. The following is an edited transcript of their conversation.

Heather Somerville: Where Chinese money has been particularly important to U.S. tech startups is in hardware. Hardware is an area that a lot of U.S. venture investors don’t really like to fund. They find it difficult and expensive, and tricky to pay off. But China has been more enthusiastic about backing these types of startups. They’ll very much back early, early stage startups where there’s a lot of risk. So all of these sorts of companies have definitely lost a fairly significant investment source.

Jed Kim: You mentioned that they kind of had an appetite for risks but now were seeing them no longer doing that. How have the risks mounted for them?

Somerville: Right. I think the appetite was for kind of technological or financial risk, but when we talk about political and regulatory risk, that seems to be a different ball game. So the reason that Chinese investors are really not even attempting to do a lot of deals these days that they used to do is because they see themselves as really noncompetitive. They know that if they go before CFIUS for review, they’re likely to have that deal unraveled and so it’ll be a big waste of time for everyone. And startups aren’t really going to want to go through that cost and that lengthy review that will slow them down. They also in many cases don’t want the additional scrutiny. A lot of these investors have some sort of government backing.

Kim: Well, what is the immediate and longer-term impact of a Chinese exit?

Somerville: Well, in the near term there’s one less source of funding for companies, and that can be viewed certainly as a disadvantage. But also I think a lot of people would argue that that’s not necessarily a bad thing. You know, more than $84 billion was invested in U.S. venture-backed companies in the first three quarters of last year. We should have the full-year data shortly here. There’s a heck of a lot of money, and valuations are high, and people see the benefit of removing some money from Silicon Valley. Long term, I think what people are concerned about is that the U.S. will be put at a disadvantage because this Chinese money will go elsewhere. Perhaps it will be invested domestically. We’re already seeing signs that a lot of it is shifting to Southeast Asia or Latin America.