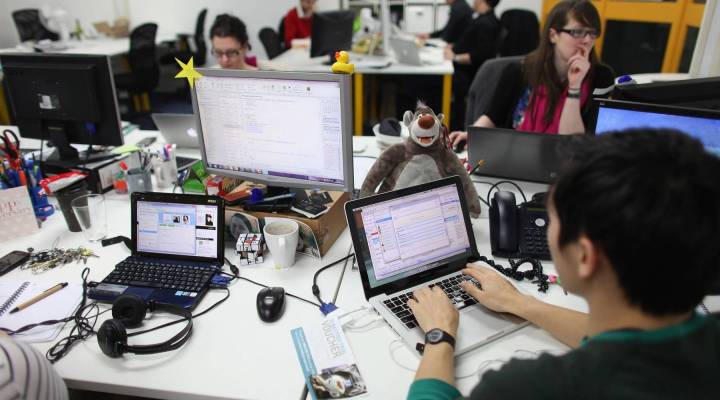 One sign of the tech boom: If you could code and had a pulse, you had a job. That’s changed, said Steven Bryan, an IT specialist who is unemployed.

“I actually never went looking for a job. Normally when something would disappear another door would open up,” Bryan said.

Bryan was at the NOVA Job Center in Sunnyvale, California. It provides career advice mostly to tech workers.

“The hiring itself has slowed down,” said Kris Stadelman, director of NOVA. But she adds that we ought to put that slowdown in perspective.

“This slowdown is compared to last year, which was not a normal year for us. Last year the job market was roaring with job growth. Yes, we are seeing big layoffs, but we are still seeing hiring, too,” she said.

Fueling that growth were venture capitalists and other investors plowing money into startups, on the hunt for the next Facebook or Airbnb. But that frenzy was fueling an environment where it seemed like investors were throwing money at any young guy with an idea and a hoodie.

Scott Brosnan, a recruiter at Workbridge Associates, describes the startup mentality like this: “A million people walk into a bar and don’t spend one dime and the owner considers it success.”

But that attitude is changing as investors are becoming more cautious. Funding is slowing and startups are folding.

Eric Buatois is a veteran venture capitalist at Benhamou Global Ventures in downtown Palo Alto. Like most people in Silicon Valley, Buatois doesn’t use the words “tech bubble” or “bust” when describing the recent tech economy. Instead, he describes it as “frothy.”

“Froth” is the Silicon Valley term for when startups are valued at much more than they’re worth.

Unlike a bubble, froth doesn’t pop — it subsides. Buatois thinks that could be a good thing for Silicon Valley.

Buatois said companies with bad business models might fall to the wayside and viable startups can sweep up talented workers to get stronger. He’s optimistic that, unlike the dot-com bust of 2000, there will be a smoother landing.

“In Silicon Valley, there is always this up and down,” Buatois said. “That’s why this place is so creative and energetic.”