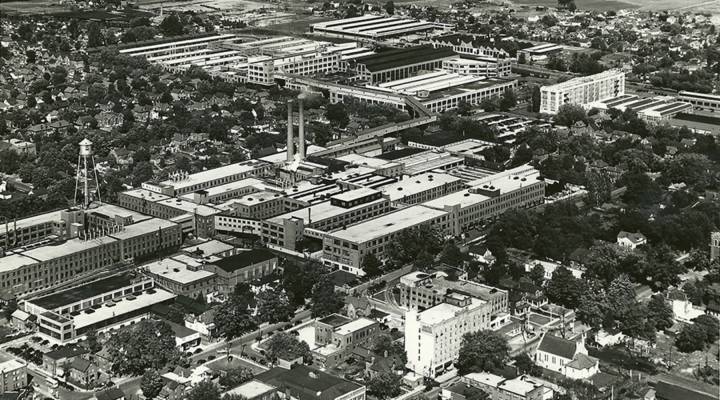 COPY
Image of the General Motors plant and headquarters in the 1940s. Courtesy of the Archival Collection at the Oshawa Museum

Image of the General Motors plant and headquarters in the 1940s. Courtesy of the Archival Collection at the Oshawa Museum
Listen Now

Canadians have been assembling automobiles in Oshawa, Ontario, for more than a century. So when General Motors announced last week that it would lay off 15,000 employees in North America, closing plants in Maryland, Michigan, and Ohio, as well as in Oshawa, it came as a blow to the city’s identity as a GM company town.

“At the peak,” said John Henry, chairman of the regional government authority of Durham and former mayor of Oshawa, GM employment in Oshawa “would have been 30,000 jobs.” His father and grandfather worked for General Motors.

“I can remember when my dad was on the line and then ultimately the foreman in the plant, every time there was a strike, the economy of Oshawa and Durham would change,” Henry recalled.

Strikers in front of the Mary Street Plant, September 1955.

Courtesy of the Archival Collection at the Oshawa Museum

Layoffs and attrition have since shrunk the plant’s workforce to around 3,000 people. When they clock out for the last time next year, the city’s economy will lose $225 million (U.S.) in income annually.

Several companies that supply parts to GM will also close or cut back local operations. One firm, Martinrea, said it will shutter its plant in neighboring Ajax, and offer relocation to its 77 workers. With these ripple effects, the BMO Financial Group estimated GM’s move could drag down the province of Ontario’s GDP by as much as half a percent.

But Oshawa is not the company town it once was, and the diversification of its economy will cushion the latest blow, predicts Alan Arcand, an economist at the Conference Board of Canada.

As the GM plant shrank, Oshawa gained a large health care complex and the campus of the University of Ontario Institute of Technology. Employment in construction and real estate has grown as people sought affordable housing near Toronto, which is about 45 minutes away.

Meanwhile, some companies that worked closely with GM adapted during its long decline. Jeff Robinson, president of contractor J.J. McGuire, said GM Oshawa has been his company’s mainstay.

“We’ve done millions of square feet of renovations there,” he said. However, “Years ago we strategized to try to diversify from the automotive and find other ways of making money.”

A mural painted in the 1990s representing the development of Oshawa, including the McLaughlin Carriage Company, which became General Motors of Canada.

Today, work at GM occupies only about a quarter of the contractor’s employees. J.J. McGuire has moved into building nursing homes and affordable housing.

GM says this round of plant closures will let it shift resources to developing electric and autonomous cars.

John Komar argues those changes in the automotive industry, while painful, could end up being good news for the city and province in the long run.

Komar spent three decades at General Motors and now runs an automotive research center at the University of Ontario’s Institute of Technology. The big automakers come here to test their vehicles’ new features in a state-of-the-art wind tunnel, which can simulate weather from a blizzard to a hot day in Arizona.

The university is training students to work for the automakers that remain in Ontario, including GM, which still has a research facility nearby.

For many people in Oshawa, that adds to the sting of GM’s decision. John McVey is among those who will lose his job at the assembly plant next year.

“They’ve got all the brains and engineering things have here but they said ‘oh well we’ll take that and we’ll go somewhere else with manufacturing.’ Somewhere where they can pay people way less.” He and others hope GM will reconsider, and decide to build its next generation of vehicles here, too.

Correction (Dec. 12, 2018): An earlier version of this story misidentified the source of the two color photos. The credits have been corrected.