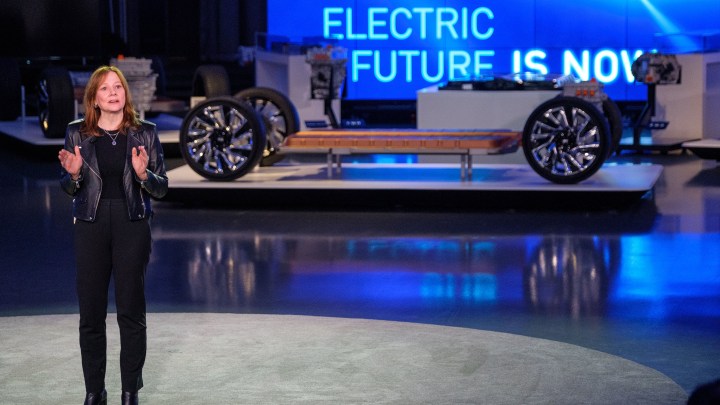 COPY
GM plans to become carbon neutral in its global products and operations by 2040. Pictured: GM CEO and Chairman Mary Barra speaks at a gathering on GM's electric vehicle technologies on March 4, 2020 in Warren, Michigan. Steve Fecht for General Motors

General Motors says it is pressing the accelerator on the way to eliminating the fossil fuel-powered internal combustion engine.

CEO Mary Barra announced Thursday that, by 2035, the company plans to produce and sell only zero-emission cars, SUVs and pickups. She said by 2040, GM’s global operations will be carbon-neutral.

It’s a big lift. Is it doable? GM has already invested heavily to develop electric vehicles and convert assembly lines.

Still, getting to a zero-emission all-electric fleet in just 14 years will be like navigating one of those drive-test obstacle courses.

“GM is a profitable company right now, but as they transition, it’s going to present a lot of profitability issues,” said Garrett Nelson at CFRA Research, who adds that GM doesn’t have a great track record.

“The company has discontinued a number of models — the Chevy Volt, the Cadillac CT6 — because they haven’t sold particularly well,” Nelson said.

Kristin Dziczek at the Center for Automotive Research said GM has company.

“All of the automakers are talking about cleaning their operations and unveiling a whole range of electric and electrified models,” Dziczek said.

They have to, she said, to meet climate change goals from governments worldwide.