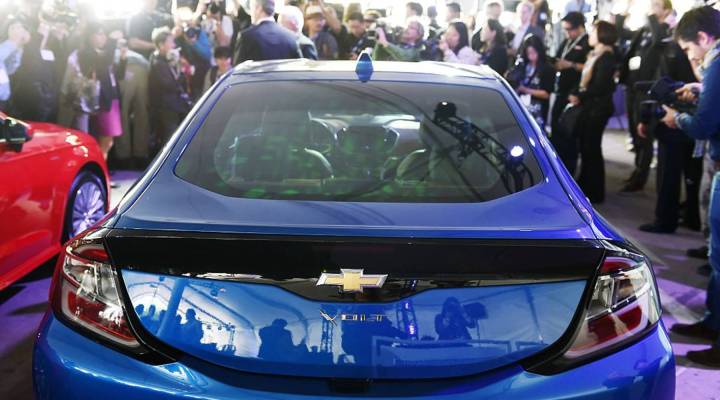 COPY
A crowd gathers around a 2016 Chevrolet Volt after it was named 2016 Green Car of the Year, at the 2015 Los Angeles Auto Show in Los Angeles, California, November 19, 2015.  ROBYN BECK/AFP/Getty Images

A crowd gathers around a 2016 Chevrolet Volt after it was named 2016 Green Car of the Year, at the 2015 Los Angeles Auto Show in Los Angeles, California, November 19, 2015.  ROBYN BECK/AFP/Getty Images
Listen Now

General Motors reports earnings this morning, amid declining vehicle sales and higher manufacturing costs from tariffs. Longer term, the company is betting on electric cars, with plans to roll out 20 all-electric models over the next five years. On Friday, GM called for a national zero-emission vehicle program, even as it supports a rollback of Obama-era gas mileage standards.

“Having put billions of dollars into this technology, they want to make sure they actually have a market to get people to buy these vehicles,” explained Sam Abuelsamid, an automotive analyst for Navigant Research. However, some environmental groups are skeptical.

“It’s a shiny thing to put out there, that distracts from the fact that they are calling for a rollback of the vehicle emissions standards,” said David Reichmuth of the Union of Concerned Scientists.