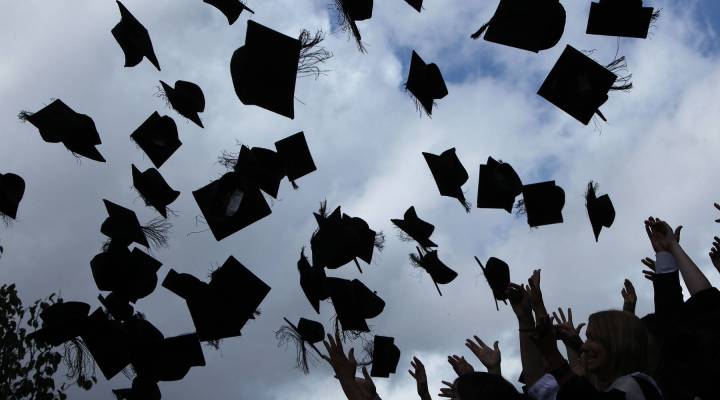 COPY
Students throw their mortarboards in the air during their graduation photograph at the University of Birmingham degree congregations on July 14, 2009 in Birmingham, England. Christopher Furlong/Getty Images

Students throw their mortarboards in the air during their graduation photograph at the University of Birmingham degree congregations on July 14, 2009 in Birmingham, England. Christopher Furlong/Getty Images
Listen Now

When Sterling HolyWhiteMountain graduated from college, he wanted to use his degree to give back to the Blackfeet Reservation in Browning, Montana — the community he grew up in. Instead, he found that pursuing his own career while also living on the reservation was going to be tough. HolyWhiteMountain, now a Stegner Fellow at Stanford University, wrote about his experiences on the reservation for The Atlantic, and spoke to Marketplace host Molly Wood about those experiences. The following is an edited transcript of their conversation.

Molly Wood: So the title of your piece in The Atlantic is “Black Feet Brain Drain.” What are you referring to? Tell us about that.

Sterling HolyWhiteMountain: Well, one, I didn’t choose the title. That is something that I found out in the writing process is that like when you write for somebody like The Atlantic, you don’t really have a say in the title, which was fine, but that was their interpretation of what the heart of the article was.

Wood: Do you agree?

HolyWhiteMountain: I do. I think for me personally, like, that’s what the article is about. I’ve been around the country a lot and I know a lot of people who are from other reservations. And when I talk to them about this type of stuff, they nod their heads. This is something that’s taking place across Indian country in the United States.

Wood: What’s so interesting is that we always hear this narrative that education is the key to rebuilding communities, whether it’s on reservations or even across rural America, and your piece seems to really be saying, “No, that’s not enough.”

HolyWhiteMountain: It’s very much like the fish in water thing where, like, fish don’t know they’re in water because that’s all they’ve ever been in, right? And so when you grow up in Indian country, this narrative about what education is for, that’s just what you grow up with. When I was a kid, I would still hear people say it this way, and what they would say is, “You need to learn the white man’s way so that you can come back and help this place exist and function in this world the way it works now.” Now, that’s not the narrative anymore, but that’s still the subtext, in a way of education, that this is what you’re supposed to do. But my class was one of the first classes from Browning where a lot of people went off to college, and I can hardly think of a single one that’s actually back on the reservation at this point.

Wood: In your article, it seems like you’re saying that one reason it doesn’t work is because there’s not an economic infrastructure to support these educated people who come back.

HolyWhiteMountain: Yes. It’s not that there’s no white-collar jobs. I had one of them; I was working at Blackfeet Community College. But there is not what you could call a white-collar economy. And I’m not sure that I’ve ever been to a reservation where I could say, like, this place clearly has that level of economy.

HolyWhiteMountain: I’m in Northern California for the next two years because I got to Stegner Fellowship at Stanford. I’ll be writing on Stanford’s dollar for the next two years. Thank you very much, Stanford. The other part of that article that’s sort of purely personal I guess or like not something that you could apply across the board is that because I am unfortunately a writer of fiction, it’s very hard to figure out how to do that and make money at the same time. And so even when I’m done at Stanford, because it’s not a degree and it doesn’t guarantee you any sort of future employment or income, I’m still going to be in a position where I’m not quite sure what I’m going to do when I get out.

HolyWhiteMountain: In all likelihood, the situation I’ll be going back to will be the same one that I left. I think this is one of those things where I think it’s very hard for regular Americans to understand [that] not very many Americans grow up in a place where there is almost no economy to speak of. It’s very difficult to understand how much of your sense of how the world should be has been determined by the fact that you grew up in a place where you lived in a functional economy. If you don’t live in a place like that, it becomes very difficult to figure out what these larger cultural narratives are really for. When I would ask my students, “Why do you guys want to go to school? Why are you getting your associate’s degree?” And a lot of them said they want to go out and go to school somewhere else, say at the University of Montana or Montana State University. And then I would say, “Well, what are you going to do after that?” And that was the moment where they hit the wall of understanding because there is no narrative with any kind of detail in an Indian country about what you’re supposed to do with that education. There’s no discussion of that. 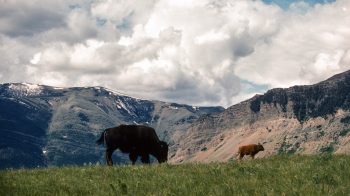