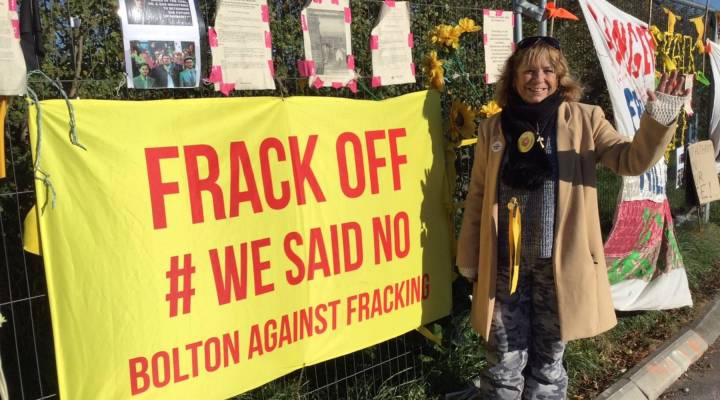 After years of delay, debate, and demonstrations, fracking has returned to the United Kingdom. A company called Cuadrilla Resources has launched a three-month-long exploratory project in the county of Lancashire in the northwest of England. It hopes to assess whether it can earn a profit extracting natural gas from shale deposits there.

But the company has run into some problems.

Protesters gather every day outside the fracking site at Little Plumpton, a small hamlet in the Fylde peninsula northwest of Manchester.  They have festooned the perimeter fence with posters and placards spelling out their objections to fracking: It will, they say, pollute the air, poison the water supply, ruin the landscape, and, by developing an additional source of fossil fuels,  exacerbate global warming.

Every time a vehicle enters or leaves the premises, protesters crowd around it, shouting: “Shame on you! Get another job! The sooner Cuadrilla goes bust, the better!”

But this roadside resistance isn’t Cuadrilla’s biggest headache. The earthquakes are. Back in 2011, Caudrilla was blamed for triggering two small tremors by fracking in the Fylde peninsula. That brought operations to a juddering halt, followed by a seven-year moratorium. The company has been allowed to resume drilling and pumping on the strict understanding that if it causes seismic activity above a permitted threshold, operations have to stop for 18 hours.

Since the company began fracking at Little Plumpton three weeks ago, they’ve had to suspend operations an average of once a week. It’s the mandatory shutdowns, claims protester Bob Dennett, that will spell the end of fracking in Britain.

Cuadrilla has asked for the tremor threshold to be raised. So far the government has refused. Manchester University Professor of Structural Geology Ernest Rutter, sympathizes with Cuadrilla. The  tremor threshold — 0.5 on the Richter scale — would never be felt on the surface, let alone cause any damage, he said. “It’s far too low,” Rutter said. “Certainly if you compare it with the equivalent cutoff point for fracking in the United States, which, depending on the state, is about a thousand times higher.”

Rutter says Britain adopted a very cautious approach to fracking after the two Cuadrilla earthquakes of 2011, of which the larger measured 2.3 on the Richter scale. That episode stoked opposition from environmental and community groups, and has slowed the progress of this technique in the U.K.

“It has certainly been very, very  slow,” Rutter said. “Ridiculously slow. I’m sure the Americans would laugh at the British for how slow this process has been.”

Professor of Structural Geology at Manchester University, Ernest Rutter  in his laboratory where he tests the strength and structure of rock.

Britain’s go-slow approach to fracking is not exceptional in the European context. Germany, France, the Netherlands, and Ireland  have banned the process altogether. Within the United Kingdom itself, Scotland and Wales have effectively banned it, too.

Dieter Helm, a professor of energy economics at Oxford University, is not surprised that Britain is lagging behind America in deploying the technology.

“We are a very small and extremely crowded island,” he said. “We don’t have the big open spaces that America has. There is bound to be more opposition.

“The world is absolutely awash with gas,” he said. “There’s no shortage of gas globally, including fracked gas from the United States, some of which is being imported into Scotland already. Do we have to produce it ourselves? No.”

In the northwest of England, enthusiasm for fracking still burns bright in at least one quarter: The head of the regional Chamber of Commerce, Babs Murphy, hopes her region  will  become a center for the European fracking industry.

“Lancashire — and especially Manchester — were  at the heart of the Industrial Revolution,” she said. “We’re a pioneering county, so why not embrace this new industry?”

Murphy told Marketplace that local businesses  have already sold $15 million worth of goods and services to Cuadrilla. If the test fracking proves positive,  she hopes that could turn into hundreds of million dollars worth of business and thousands of high paying jobs.

Nevertheless, she believes that very few business people are prepared to voice their support for fracking because “they don’t want protesters outside their premises.”

Protesters say they’ll stay at the fracking site in Little Plumpton to wage their campaign until the site shuts down. They believe that victory is imminent. But Cuadrilla has spent $130 million so far prospecting for gas in the U.K. It isn’t about to walk away either.

Correction (Nov. 8, 2018): An earlier version of this story incorrectly compared the size of shale gas reserves in the U.K. to those in the state of Pennsylvania.