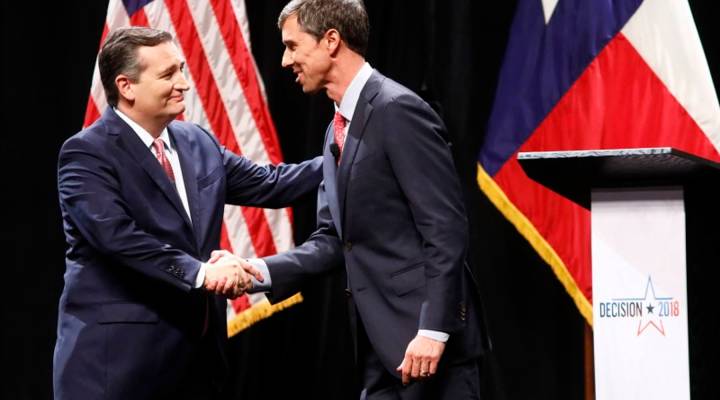 COPY
Sen. Ted Cruz (R-TX), left, and Rep. Beto O'Rourke (D-TX) shake hands after a debate at Southern Methodist University in Dallas in September. Both candidates for the Texas Senate seat have ads in English and Spanish.  Photo by Tom Fox-Pool/Getty Images

Sen. Ted Cruz (R-TX), left, and Rep. Beto O'Rourke (D-TX) shake hands after a debate at Southern Methodist University in Dallas in September. Both candidates for the Texas Senate seat have ads in English and Spanish.  Photo by Tom Fox-Pool/Getty Images
Listen Now

The Latino vote is a big prize in the midterm elections. Latinos make up almost 13 percent of all eligible voters, more than 29 million people. The Democratic Party, in particular, has been criticized for not energetically courting Hispanics. But this week, the Democratic Congressional Campaign Committee released a TV ad campaign in Spanish that will air in California, Utah, Nevada and Texas.

The candidates for the open Senate seat in Texas were already trying to engage that base. Ted Cruz released a number of ads in English.

He also released this ad, in Spanish, narrated by his father, telling the elder Cruz’s story about emigrating to the United States from Cuba in the late 1950s.

Juan Sequeda, a 33-year-old computer scientist in Austin, has seen both ads. He’s bilingual, and with a chuckle explained the Spanish one seems to take a different tack, focusing on the American dream.

“You can definitely see the complete difference, right?” Sequeda asked. “There is no talk of, ‘Here is this policy, here is this position that’s being taken.’ It’s completely emotional.”

Tugging at heartstrings is the playbook for most political ads in Spanish.

“A lot of the Spanish-language ads really focused on culture, on these emotional messages talking about the American dream and Latinos caring about family values, shared values,” said Marisa Abrajano, a University of California, San Diego, political science professor.

She is worried that Spanish-only voters will be left in the dark if these ads only play on emotion and talk less about policy issues like taxes or health care.

According to the Pew Research Center, almost a third of all eligible voters in Texas and California are Hispanic, and their numbers are growing in many states across the country. Many of those households speak predominantly Spanish.

The Democratic Congressional Campaign Committee announced a $500,000 ad buy this week to galvanize the Spanish-speaking vote, but overall, is spending on Spanish-language ads going through the roof?

“The answer to that question is: not really,” said Armando Azarloza, CEO of the multicultural marketing firm The Axis Agency. Before advertising, Azarloza spent time crafting TV ads in Spanish for Republican political candidates.

Azarloza admits we won’t have a clear picture of exactly how much has been spent on Spanish ads until after the midterms, but we do know that spending during the 2016 presidential campaign was less than $3 million, down from $20 million 10 years before.

Azarloza thinks, eventually, there will be a tipping point.

“We’re a larger part of the electorate every single year, but political parties still underinvest in that outreach,” he said.

O’Rourke, a U.S. Representative from El Paso, Texas, is fluent in Spanish, so recording one more ad simply requires another take.

Yale University political science professor Alex Coppock recently published a study on on the effectiveness of ads in Spanish and found the difficulty for campaigns is figuring out where to place those ads.

“The major cost, and this is why I don’t think we see more candidates doing it, is if you hit a monolingual, English-only person with the Spanish-language version, they react extremely negatively,” Coppock said.

He said the study didn’t focus on why some people had that reaction, but it could be that English-only speakers tend to bristle at ads in Spanish because they want the candidates to appeal to their own culture. Coppock noted the main obstacle for campaigns is the data on exactly who speaks Spanish in a community isn’t specific enough.

“This might be the sort of thing that works better when you can target at the individual level, like online advertisements,” Coppock said.

A person’s online behavior, search patterns and clicks tell politicians more about a preferred language than a ZIP code, which means the future of Spanish political ads could be more targeted to Facebook feeds than what’s on TV.