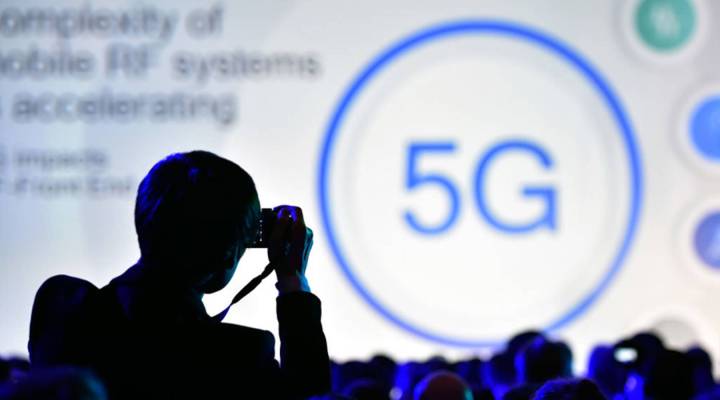 The whole multitrillion dollar promise of 5G — millions of jobs and new businesses — is just a pipe dream without infrastructure. Unlike 4G, which can be delivered through a relatively small number of tall towers, 5G wireless service relies on lots and lots of small receivers placed fairly close together. And installing all those little 5G cells is turning into a big fight.

Pete Holmes is Seattle’s city attorney. Seattle is one of several cities fighting a new order from the Federal Communications Commission that puts a cap on how much a city can charge when a company wants to put a 5G receiver on public property.

“This is being done at the expense of cities that are already overburdened trying to deal with homelessness and a host of problems across the country,” Holmes says. “We have to essentially give up our property rights, our property values, to benefit private companies that will be doing the expansion.”

The FCC says cities like Seattle are charging excessive fees, and the flat rate would save telecom companies about $2 billion, which would allow them to build infrastructure all over the country, including in traditionally under-served rural areas.

Brendan Carr is the FCC commissioner who initiated the new order. He says it’s also the key to beating China.

“Right now [China is] deploying small cells … somewhere around 12 times the pace that we’ve been doing in the U.S.,” Carr says. “And largely that was due to our outdated permitting processes and regulatory red tape.”

Mike Dano is editor in chief of the wireless industry publication FierceWireless. He says competing with China in the 5G infrastructure race is an uphill battle, particularly in our current political environment.

“The rollout of 5G has become shockingly politicized,” Dano says. “You’ve seen it argued as a national security issue … because if the United States doesn’t deploy 5G fast enough, then China will, and that will put China ahead of us in terms of technological capabilities.”

But all this raises the question: If 5G is such a big deal, economically and in terms of security, should the federal government pay for it?

“You know our whole interstate highway system was underwritten by the federal government,” Holmes says. “That’s why we have such good, had such good infrastructure.”

Back in January, the Trump administration actually floated the idea of a secure, national 5G network. Carr says that’s not going to happen. But he said there are already existing federal funds to build out internet and 5G access, especially in rural areas — although these funds are small compared to the $400 billion China has directed toward 5G over just five years.

And now for some other tech news Molly is following: