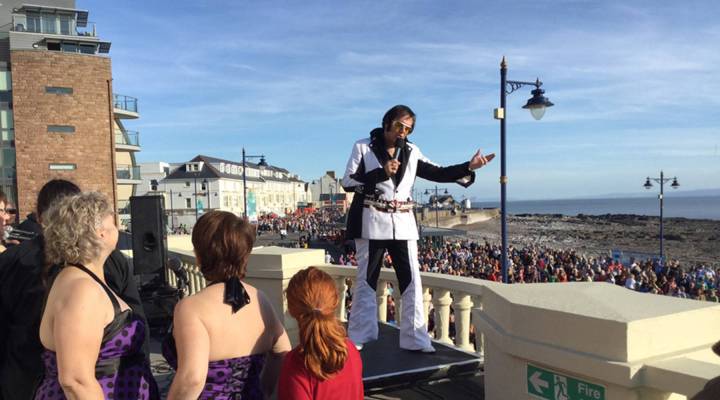 Here’s an unusual tale of urban revival in the U.K., which owes much to an iconic entertainer from the U.S. The small Welsh seaside resort of Porthcawl — population 10,000 — had been waning for years. Holidaymakers had been choosing sunnier vacations overseas and the town, with its rather antiquated fairground and slightly tacky amusement arcades, was sliding into seedy decline.

But now the town is undergoing an economic renaissance.

And it’s largely thanks to the King of Rock n’ Roll.

“The town has no connection with Elvis whatever. If you thought of all the imagery that goes with Elvis like Hawaii or Las Vegas, Porthcawl doesn’t tick any Elvis box whatsoever,” Phillips told Marketplace. “So I thought: Yes! An Elvis festival in Porthcawl is so ridiculous, it could work.” And it has, brilliantly.

Some 40,000 people throng the town throughout the festival weekend in late September, pumping an estimated $10 million into the small local economy, putting Porthcawl on the map and generating more business throughout the rest of the year.

The festival goers flock to see the King. Not in person, of course, but in the shape of Elvis impersonators or Elvis Tribute Artists (ETAs), as they prefer to be known.

More than a hundred ETAs attended this year’s festival, putting on a performance in one of the town’s music venues, wearing the trademark white jump suit, goggle-like shades and helmet of shiny black hair. Most of them, like Dave Barlow (stage name “Dave Memphis”), are semi-professional.

“I work as a van driver full time. That’s my proper job. But I do little Elvis gigs here and there. Some gigs I get paid for, mainly to cover my costs. It is an expensive game this, with all the traveling and the gear. I don’t do it for the money really, I do it for the love of Elvis,” Barlow said.

The Elvises came in all shapes and sizes: short and fat, tall and skinny. But all strove to sound like the real thing, emulating the singer’s distinctive quavering style.

Standing outside a bar in Porthcawl, Marc George, voted Best Welsh Elvis for two years in a row, gave Marketplace an impromptu, a capella rendition of “ Love Me Tender.” The song was delivered with lip curling authenticity, the result, George said, of more than 30 years of practice. A security man by trade, George admits that he does resort to artifice to enhance his appearance. His bushy black sideburns are his own but he wears an Elvis wig to conceal his baldness. “That might be OK for a Telly Savalas Tribute Artist,” he said. “But that wouldn’t be the right look for Elvis.”

This year’s festival reached the peak of kitsch on the roof of Porthcawl’s Grand Pavilion overlooking the seafront. Before a large crowd, two couples from Australia renewed their wedding vows drawing inspiration from Elvis’s lyrics and chanting in unison lines like: “When I first saw you with your smile so tender …” and “Take my hand, take my whole life too …” The ordained minister, conducting the ceremony, himself an Elvis Tribute Artist, rounded off the proceedings by belting out a sort of secular hymn: “Can’t Help Falling in Love.”

The festival goers lapped it up.

And local business people spoke warmly about the whole event.

“It’s exceptionally good for business,” said Norman Harris, who runs a small graphic design and printing company in the town. “People want Elvis signage, and flyers, brochures and the rest. There’s an incredible surge in orders. I wish we could have an Elvis Festival once a quarter, frankly,” Harris said.

“They all gain, from the drinks to the chip shops, the restaurants. Everybody gains. So that’s why everyone loves the Elvis Festival in Porthcawl. Elvis and making money. What more do you want?”

The King himself might have been amused. The world’s biggest festival to his memory, say the organizers, is not at Graceland or in Nashville but in a small, and now reviving, seaside town in Wales.