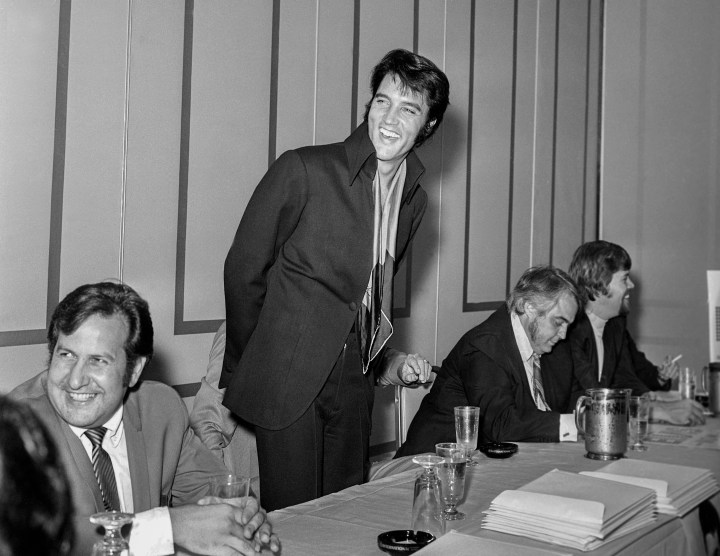 The following is an excerpt from Richard Zoglin’s “Elvis in Vegas,” a new book that explores how Elvis Presley helped create artist residencies in the city, changing its economic history in the process.

In a town that got blindsided by the rock revolution, it was only fitting that Vegas would turn to the original rock ’n’ roller, Elvis Presley, as the agent of its reinvention. With his spectacular 1969 comeback show at the International Hotel, Elvis supplanted Sinatra as Vegas’ signature star and most bankable attraction. He would return to the hotel — later the Las Vegas Hilton — every six months for the next seven years, and each of his sellout engagements was a bonanza for the city, bringing in visitors from around the world and giving a boost to business all over town.

Las Vegas was also a witness to Elvis’s sad, oft-chronicled decline: the ballooning weight, the mounting drug use, the gradual deterioration of a star who grew increasingly bored and isolated in the Hilton’s thirtieth-floor penthouse suite — a prisoner of the town as well as its savior. His shows grew more bombastic, his performances more lazy and undisciplined. Even before his death in Memphis from a drug overdose in August 1977, Elvis had become a parody of himself. “For many,” wrote Dylan Jones in “Elvis Has Left the Building,” “Vegas Elvis was already Dead Elvis.”

Yet, in that 1969 comeback show and for at least a year or two after it, Elvis was at his peak as a stage performer: trim and still impossibly handsome, his voice richer and more expressive than ever, his onstage charisma undimmed by age and the years of absence. He was no longer the transgressive young rock ’n’ roller of the 1950s. But he reinvented himself, expanded his range, and deepened his artistry in a way that few other entertainers have.

Elvis’s comeback show at the International Hotel had a huge impact on Las Vegas. It raised the stakes, both in terms of money (his $125,000-a-week salary was a record at the time, soon to be surpassed) as well as production scale and promotional hype. He showed that Vegas audiences could be receptive to a broader range of music than the city was usually accustomed to — not just rock (at least in limited, nonthreatening doses), but also country, rhythm and blues, and even gospel. Most crucially, he created the model for a different kind of Vegas show: no longer an intimate nightclub encounter for an audience of a few hundred, but a big-star extravaganza, playing to thousands. He paved the way for the lavish shows of stars like Cher and Dolly Parton — and, much later, Céline Dion, Elton John, and a new generation of pop stars enlisted for Vegas “residencies.”

Elvis, moreover, attracted a new kind of audience to Las Vegas. His fans were not the high rollers and sophisticated nightclub patrons who came to see Sinatra or Dean Martin. They were middle-class folks on a budget, thirtyish housewives who had screamed for Elvis when they were teenagers, families from the heartland who made Elvis the centerpiece of their once-a-year vacation splurge. It was the same audience that would later flock to Vegas for the extravagantly staged magic shows of Siegfried and Roy, the acrobatic spectacles of Cirque du Soleil, and the theme-park hotels re-creating the canals of Venice, the pyramids of Egypt, and the streets of Paris. In a sense, Elvis sounded the starting gun for all the changes that would transform Vegas over the next couple of decades, from a gambling-and-nightclub town for adults into a vacation destination for the whole family.

Elvis, of course, never really left the building. Decades after his death, the city’s most famous star still looms over Las Vegas — in the Elvis impersonators and Elvis wedding chapels still sprinkled around the city, in the Elvis tribute shows and Elvis festivals that keep his memory and music alive. And why not? It was a fruitful relationship for both. Las Vegas saved Elvis, at least for a little while. And Elvis showed Vegas its future.